The Queen is a royal delight! 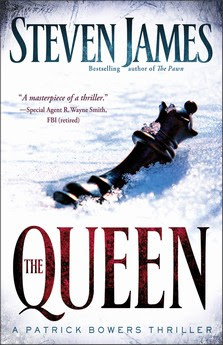 FBI Special Agent Patrick Bower receives a phone call to investigate a murder. A woman and her four year old daughter were found shot and killed in the home. The husband, Donnie Pickron has gone missing. You might wonder why the FBI would be called to investigate a murder. Murders happen all the time. What makes this one interesting is that the husband is ex-military…Navy.

Pat is joined by Jake, a profiler. As Pat and Jake investigate, they uncover information about weaponry dating back to the Cold War. So what is the connection between a murder in the present day and weapons from the Cold War?

The Queen is book five of the Patrick Bower novels. It is the second book I have read. It can be read as a stand alone novel, though there are some references to relationships and events from the past. Not reading the books in chronological order will not take away from your experience and enjoyment in reading this book. This book starts out with a bang and keeps a steady pace the whole way through until the last page.

Patrick is a great character. He is intelligent and has issues. I know this may seem weird to say that I like that a character has issues but this made Pat a more personable character that I could get behind and not just a hard nosed stuck up prick of a character. The ending is a good lead into the next book. The Queen is a royal delight!

“Available September 2011 at your favorite bookseller from Revell, a division of Baker Publishing Group.”