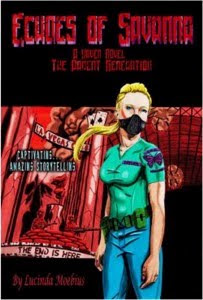 Graduated high school at age 12, medical school at 19 and no one believed that Savanna Taylor was a doctor. Sometimes, she was a bit taken back herself, but with a very high IQ, she was used to it. She wasn’t used to the smallpox pandemic she encountered in Arizona and still held herself in stride and did all she could.

She impressed the Chief of the Navajo clan there, Chief Etu and he came to think of her as a daughter. His own children and grandchildren had problems of their own and Savanna was a gem compared to some of them - especially Kia the problem child of them all. Kia had been raped and now was pregnant.

In the 2030s, Savanna and her father were somewhat celebrities in the gene transplanting field. Kia wants her embryo harvested but will only allow it to be transplanted into one person – Savanna. After careful thought, Savanna agrees and becomes the mother of a beautiful child she names Bly but who is known as Raven for her black shock of hair. Raven is wonderful, generically perfect (thanks to Mom’s experiments) but profoundly deaf. Supported by a group of friends, Savanna travels north to Idaho to help her father at the home for women he created called Haven. When she arrives, he has been murdered.

Echoes of Savanna was an interesting tale to read. Some of it was a bit jagged and didn’t seem to flow well but most was great! It was a testament to what happens when you make “babies to order” and how technology came not only help us but hinder. Not one of my favorites of 2011 but you may truly enjoy it.


About the Author: Lucinda Moebius grew up in the mountains of Idaho and Eastern Oregon. Her mother taught her to read when she was four years old and since that time books have been her constant companions. She has a Bachelors Degree in English Teaching, a Masters in Educational Leadership, and is currently pursuing a Doctorate in Education. Lucinda supports her writing habit by teaching High School and College. She currently lives in Boise, Idaho with her husband and their dog and cat. Lucinda is the author of Echoes of Savanna, a Haven Novel, part of the Parent Generation.