The best choice I made was Following Atticus! 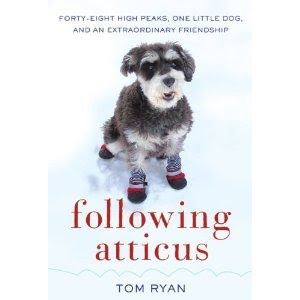 Tom Ryan is owner, writer, and editor of his own newspaper. Mr. Ryan’s paper is called “Undertoad”. Mr. Ryan was not really in the mark for a dog when he became the new owner of a dog. A member of the city’s zoning board had sent a mass email reaching out to everyone to see who could take a dog. Tom was going to just write back to he would be happy to advertise in his newspaper about the dog but the next thing Tom knows, he is responding that he will take the dog. Tom did not have Maxwell for very long before he passed away from seizures. It was at this time that Tom realized that he liked having a dog and the company that a dog brought. This is where Atticus Maxwell Finch enters Tom’s life. You would not know it at first glance that such a small dog like Atticus would have such a big heart and determination but he does.

Tom and Atticus quickly formed a bond. Tom invited his brothers out to visit him. They had been estranged. That changed and the brothers were visiting each other. One of Tom’s brother’s David invited them to join him to hike all of the White Mountains of New Hampshire. There are forty eight of the mountains and they are over four thousand feet high. If you can accomplish such a great feat than you will be eligible to become a member of the Appalachian Mountain Club’s Four Thousand Footer Club. Where you will receive a patch and a scroll. Tom and Atticus took on this task and soon they were hiking every mountain. It was during these times that Tom and Atticus really grew close and became good companions.

Reading this book reminded me of another great book about a man and the bond he shared with his dog, whom was a standard size black poodle named Charley. Yep, you guessed it. The book I am talking about is John Steinbeck’s Travels with Charley. Only in this book, Charley is a mini schnauzer named Atticus Maxwell Finch. Atticus is the star of this book. He won me over when he and Tom were testing each other with the great cage and bath room incident. I knew than that Atticus was smart. To be honest at first I would not picture author, Tom Ryan with such a small dog but as I got to know both Tom and Attics better, I realized that they were meant to be together and made a perfect fit. The best choice I made was Following Atticus!

Tom Ryan is the founder of the Newburyport, Massachusetts, newspaper the Undertoad and served as its publisher and editor for more than a decade. In 2007 he moved to the White Mountains of New Hampshire with miniature schnauzer Atticus M. Finch. Over the last five years, Tom and Atticus have climbed more than 450 four-thousand-foot peaks. After raising thousands of dollars for Angell Animal Medical Center in Jamaica Plain, Massachusetts, the pair was inducted into the Massachusetts Society for Prevention of Cruelty to Animals Hall of Fame. Tom currently writes the popular The Adventures of Tom & Atticus column in the Northcountry News and Mountainside Guide, and the blog The Adventures of Tom & Atticus. Tom and Atticus live in the White Mountains of New Hampshire.
Tom Ryan