The Addict in Me and Tales from the Yoga Studio 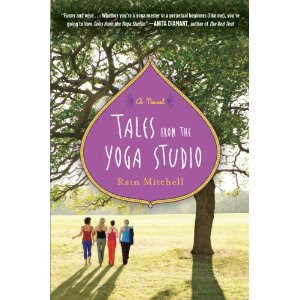 Lee is the owner of Edendale Yoga studio. Lately, her perfect life is quickly going downhill. Her husband, Alan moved out a few weeks ago. As if that was not bad enough, Lee is having money issues and had to make a decision about the future of Edendale. With some new clients, Lee decides to focus what she does best…teaching yoga and help others discover their full potential. Lee helps Katherine, her friend and masseuse, Graciela, a dancer, Imani, a famous actress and Stephanie, a screenwriter.

I would classify Tales from the Yoga Studio as a chick lit novel. Not that there is anything wrong with this, as every once in a while I need something to break up my books and a chick lit novel is the way to go. While I liked the ladies and the close friendship they formed, I never really connected with any one character in particular. This was a shame as that is one of the nice things about a novel like this is that usually you can relate to the characters. I found that it was really the other woman that helped lift up Lee and turn her around from being bitter and sad to happy again. This book is a quick read. Tales from the Yoga Studio would make a perfect reading for your next book clue selection.

The Addict in Me
By Rain Mitchell,Author of Tales from the Yoga Studio


In advance of the publication of my novel, Tales from the Yoga Studio, I spent a portion of the fall talking it up to as many people as I could. I was trying to promote my book as a good reading group selection, and attempting to convince everyone I know who is either a big reader or a yoga practitioner (or both) that I thought they'd have a lot of fun with it.

In the midst of all this self-promotion, one friend said, in a slightly peeved tone of voice, "So what are you reading right now?"

I hesitated for a minute and then mentioned that big fat novel that everyone was supposedly reading, the one whose author was on the cover of Timemagazine and, even more famously, on Oprah.

"Enjoying it?" she asked.

"Well, I'm just at the beginning," I confessed.

What I didn't tell her was that I had bought the book over a month earlier and had barely read twenty-five pages. I'd given myself the usual excuses for why I hadn't made more progress -- too busy, book too dense, don't like the print. And so on.

But when I went home that night, resolved to dip into the book and really make a dent in it, I had to face the truth. For months (okay, years) I had been too Internet-involved/distracted/addicted to do even a fraction of the reading I did throughout my life. My mother was an English teacher, and my sister and I were brought up to love books. I never (and I mean never) left the house without carrying a book. No matter what happened -- car breaking down, traffic jam, mom in grocery store for too long -- it would be a perfectly fine day because I had my book with me, and that's all it took to make me happy. I'd choose the next book I was going to read before I was halfway through the one I was reading, and for my birthdays, I always asked for a gift certificate to our local indie bookstore. Vacations meant unlimited reading time, and I identify certain period of my life with the novel I was reading at the time.

Every time I sat down to read, I lasted about five or six minutes before I had to jump up and check my email or get a live update on something really important, like Angelina Jolie's marriage or a reality star's plastic surgery nightmare. The sad truth is, I had whittled down my attention span to seconds and had impaired my powers of concentration. As a result, for years, I had been struggling through a mere few novels a year instead of the two or three per week I had enjoyed before I ever heard of gmail.

When you spend a vast chunk of your life doing something that has no intrinsic value and robs you of the ability to do what you do love, something's off balance. I've watched enough episode of Intervention to know that I was hooked and out of control.

I decided, right then and there, to cut down to thirty minutes online per day. To monitor myself, I wrote down when I went online and when I went off, the way a dieter is supposed to write down everything she eats.

That lasted about twelve hours.

I went to a hypnotist recommended by a friend. I guess I'm not suggestible enough.

I tried to convince my nurse practitioner that I needed a prescription for Ritalin. She wasn't buying it.

Then, around Thanksgiving, I had the realization that instead of trying to convince myself to stop doing something, I should take a more positive approach. Why not just try to encourage myself to read more and see what happened?

In the past, checking my email was the last thing I did at night and the very first thing I did upon stumbling out of bed in the morning. My new plan was to make a cup of tea, lie on my favorite sofa, and read for fifteen minutes before I touched the computer, before I did anything. It's always good to start off slowly, as I learned in yoga classes.

What surprised me the most was that I initially found it painful to avoid the computer. I mean physically painful. For the first few mornings, I actually felt a kind of muscular withdrawal, as if my whole body was straining to sit down at the keyboard and go online. It hurt!

But fifteen minutes? I could do that. I was reading Maryann in Autumn, a novel by Armistead Maupin. Light, funny, and short chapters. Not too intimidating. Each morning, it got a little easier to avoid the computer, and by the fifth day, I found myself reading for half an hour. Then, without even realizing it, I started getting up a little earlier so I'd have more reading time before sitting down to write. A few chapters before the end of that Maupin novel, I was eagerly searching my bookshelves for the next book I was going to read.

Like any addict, I'm taking this one day at a time. But it's now over three months since I started, and I haven't missed a single morning. I usually read for at least an hour after I get up, and even better, I find myself reading instead of doing you-know-what in the evening as well. I'm back to reading about two novels a week, and I feel as if my concentration has improved in all kinds of other areas as well. I feel as if I have my life back.

When I was describing this to a friend, she said, "Gee, Rain, it sounds as if you're getting addicted to reading books." I happily admitted that I am. I always have been. And honestly, I can't think of a more wonderful addiction.


© 2011 Rain Mitchell, author of Tales from the Yoga Studio

Author Bio
Rain Mitchell, author of Tales From the Yoga Studio, began practicing yoga as a teenager and is currently at work on the second novel in the series. Rain's favorite pose is corpse.
Rain Mitchell

Marce said…
Her post had me chuckling at her, she is totally addicted.

I at times feel I am addicted to the internet also and if I go to bed without having my few hours it just doesn't feel right. Think about all the hours of reading I could be doing or the hours I could be giving my family :-0

I have this one on my Wishlist, I teach a fusion class that is a little yoga so sounds like it could be fun.