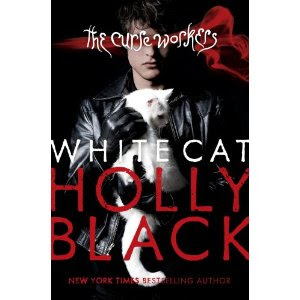 Cassel comes from a long line of talented curse workers. His mother is able to manipulate men into giving her anything she wants by working their emotions, his brothers Phillip takes after their Great-granddad Singer, who used to work as a death worker for the Zacharov family, Barron works luck and Cassel is supposedly just like their father. Before his father passed away, he was the glue that held every one together.

Cassel may come from a very cool family but he feels like the outcast. Lately, Cassel has been experiencing some very weird nightmares, involving a talking white cat. He has also been sleepwalking. This latest episode, found Cassel at school on the roof top. He has no memory of how he got on the roof. The strangest thing is that the white cat from Cassel’s dreams is real. It is like Cassel knows the cat but that is not possible as he does not know the cat except for his dreams. Cassel must discover what the cat wants from him.

White Cat is book one of the Curse Workers. This book just also happens to be my first into the world of Ms. Black and her novels. I thought this book was a pretty good start to this series. This book was kind of like the later Harry Potter in that it is kind of on the dark side but instead of wizards, there are curse workers. This story moved a bit on the slow side at first but luckily it quickly picked up speed the further I got into the book. While, I liked this book and the concept, I just wished that the story line and characters were stronger. I only connected with Cassel and his interactions with the White Cat. The rest of the characters played second string. Overall, I do plan to check out the other books in this series. White Cat may not have a strong bite but you do need to watch out for its hiss!
Holly Black