Come check out the Men of Danger 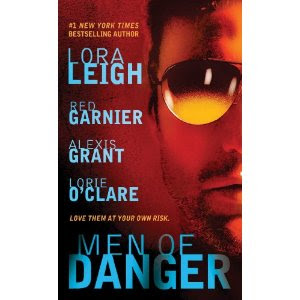 Sheriff Rick Grayson is a single father now. Due to a ruthless act on her part, she got messed up with some evil men and was murdered.

Kindergarten school teacher Hannah Brookes hears someone trying to break into her home late at night. She calls the police. Whoever was trying to break in runs away when they hear the sirens. Sheriff Grayson arrives. He installs a security system but that is not what Hannah really needs. What she really wants is Rick.

Reckless and Yours by Red Garnier

When Paige Avery walks into a room, heads turn. Zach Rivers is not immune to Paige’s beauty. In fact he wants her for himself. Zach did have her at one point a long time ago. Can he win her back?

Tempt Me by Alexis Grant

Anita Brown is an R&B singer. Just like any famous celebrity come the stalkers.
Zachary Mitchell has agreed to do a favor for his good friend, Lowell. Lowell runs a security business. Zach now finds himself playing bodyguard to Anita. Will Zach and Anita become the next Whitney Houston and Kevin Costner?

Love Me Til Death by Lorie O’Clare


Ashley Jones is a homicide detective. Her current murder case involves a dead girl. It appears as though there is a connection with another case. One that the FBI are working on.

Special Agent Chase Reed has teamed up with Ashley. Chase can’t help but admire Ashley. Unfortunately the admiration seems to be one sided. Ashley can’t stand the thought of the FBI honing in on her case. Can Ashley learn to play nice before the killer strikes again?

Men of Danger is like ordering a sampler. You get to try out a little bit of everything from sexy sheriffs to special agents. I enjoyed reading these stories. Both Alexis Grant and Lorie O’Clare are new to me authors. After reading what they had to offer, I plan to check out both ladies full length novels. Often times with anthologies, the stories can seem rushed. This was not the case with this anthology. There was plenty of action and romance. In fact, I kind of didn’t want the stories to end. I didn’t really have a favorite as I liked all four stories. Men of Danger should come with a warning…”Extreme Heat Ahead”.
Alexis Grant Lora Leigh Lorie O'Clare Red Garnier