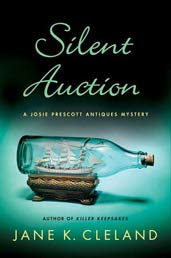 Antiques dealer Josie Prescott is preparing for the annual Rocky Point Harvest Festival. Josie’s receptionist reminds Josie that Guy Whitestone has a meeting with her to go over his Maritime collection for appraisal.

Frankie Winterelli is the Whitestone’s caretaker, part time employee of Josie’s and nephew to Josie’s good friend, Zoe. Josie calls Frankie as he is ten minutes late but he doesn’t answer his phone. She lets himself into his home and discovers Frankie dead on the kitchen floor. Some one has bashed his skull in.

There is a new sheriff in town…literally. Josie’s ex-boyfriend was the sheriff but he let town. Today is Chief Ellis Hunter first day on the job. Ellis won’t have much time to get his feet wet as he has a murder to solve.

Silent Auction is the fifth Josie Prescott Antiques Mystery novel. Though, it can be read as a stand alone novel. This book just happens to be the first time I have read anything by this author. After reading this book, I have to wonder why I haven’t tried one of the books in this series sooner. I like that Josie didn’t just sit back and wait for the police to take their time solving Frankie’s murder. Josie was right in the action, conducting her own investigation with the help of Zoe. They make a good team together. Author, Jane K. Cleland shows me why I love who-dun-it mystery novels. They are simple and fun to read. Don’t let your next book choice be silent but instead pick up a copy of Silent Auction. You won’t be sorry.