To Evil Comes a Daughter 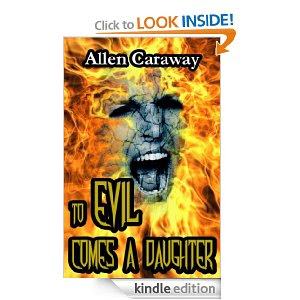 Review by Nancy You don’t get the title until the ending but the getting TO the title – well, it’s one heck of a ride! Sam Munro is a British journalist for a high tech car magazine. He travels to Montana to get a look at one cherry 1970 Mustang Mach 1 belonging to Doug Bamber. Doug and Sam hit it off and Sam is invited to Doug’s BBQ the next evening. He checks into the Inn he’s staying at and immediately things start happening Mirrors with HELP ME written on them being one. At Doug’s Sam meets many locals including a couple named Alison and Dave. It doesn’t hit him until much later, because he’d not met them before;but they are the parents of the girl he was in love with in high school. He loved and lost her because he wasn’t strong enough/brave enough to stand up to the boy who hassled them. When he asks Doug how Jane is, he is devastated to hear she has been missing for over 6 years and presumed dead. Suddenly the Mustang article is on the backburner and miscues, interviews and some odd-acting locals make Sam stay longer to seek out clues. He finds much more than he bargained for! This is an edge-of-your-seat book. I loved it but was sad to see it end. Sam is a great character and Ashley, his girlfriend is a personality all her own. Great for the mystery lover but you might want to leave a light on. Note from Author I have now made To Evil Comes a Daughter exclusive to Amazon. Therefore, free copies will be available to reviewers/customers for one day only on the following dates, starting at approximately midnight Pacific Standard Time on the day it starts and midnight Pacific Standard Time on the day it ends: January 10th January 18th, February 15th March 3rd March 24th
Allen Caraway