A Gift from Tiffany's 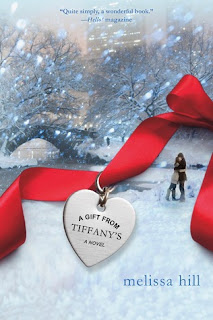 Ethan and his daughter, Daisy are in New York. They are on a very special mission. To pick up the perfect engagement ring for Vanessa. Ethan and Vanessa have been dating for a while. Ethan is happy that Daisy agrees, especially after Daisy’s mother passed away. Ethan and Daisy are leaving Tiffany’s when they spot a man who has been run over by a taxi.

Gary and his girlfriend, Rachel are also in New York. Rachel expects soon for Gary to propose to her. Only she has no clue that Gary has no plans to settle down. Also, Gary is a real tight-wad about money. In fact he goes to Tiffany and picks up a charm bracelet for Rachel for Christmas. One a charm bracelet shows that he is not serious and two it is one of the cheapest items in Tiffany’s.

Gary is the one that is run over. It is during this time that Ethan and Gary’s bags get mixed up. As you can imagine craziness ensures.

A Gift from  However, I could not really get into the two main couples that were featured. This is because I knew that they would not last. Having this feeling so early on in the beginning of this book, you can tell that their will be a happy ending and it may involve the mixing of the two couples. I don’t want to give anything away in regards to this. Let’s just say that there is a happy ending and it may be predictable but the readers will be fine with it. When it came to the epilogue chapter, I actually could have done without this chapter. This is because by this time, I was so over Gary that I could not forgive him as easily as Rachel did. I thought that he was mean and self-centered. The person that really stole the whole spotlight for me was Daisy. She was so adorable and was much wiser then the adults in this book.