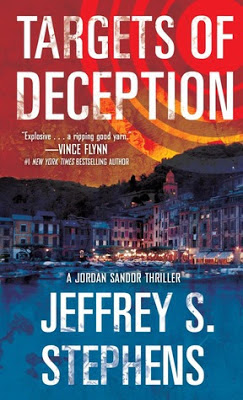 Review by Nancy Jordan Sandor is an ex-spy basically. Worked for the CIA and made a lot of enemies while doing so. One of his few friends was Dan Peters who knew all about Jordan’s past but liked him any. Theirs was a mutual respect and it led to Jordan agreeing to see a man Dan had come across who had a story to tell to someone who would know what the information was worth. But before they could meet up with the guy, they met up with some folks they could have done without. Especially Dan who is fatally injured when they stop assist a downed officer. The guy had a sister who can’t keep herself out of trouble and who doesn’t want out of whatever happened to him. She attaches herself to Jordan with the intent of “helping”. She travels with him to Paris, Italy and points oceanward until Jordan gets a call from another old friend who tells him something he really didn’t need to hear: the guy didn’t have a sister. A fast-moving great read which is the beginning of the Jordan Sandor group of tales. They don’t pull any punches, sometimes you don’t know if you like the hero and sometimes you know you don’t. The book following this one, TARGETS OF OPPORTUNITY is just a good as this one and you will want to get them both to start out the series. Reminds me a lot of Tom Clancy.
Jeffrey S Stephens