Illegally Iced is worth the read. 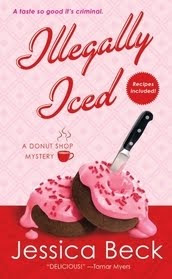 Suzanne Hart is the owner of Donut Hearts. Suzanne is minding her own business when she hears a woman scream. She quickly discovers the cause of the scream. It is because James Settle has been murdered. The prime suspect is none other than Suzanne. Earlier Suzanne and James had a dispute. James was going to put on a demonstration in the park and the smoke from his stove was blowing into Suzanne’s donut shop. Suzanne knows that the only person who can clear her name is herself. Well with some help from her friend and fellow crime solving partner, Grace. This is my first introduction to Suzanne and any of the Donut Shop Mystery books. I have to say that this was a good first date with Jessica Beck. I like Suzanne and Grace. They make a great team together. Grace is more of the outgoing one but Suzanne brings entertainment to the pair. The town of April Springs is a place that I would like to be at if it was a real place. Most of the people are nice. In addition, it is nice to be in a small town where everyone looks out for each other. A moment that I liked was when Suzanne wore a dress and everyone was asking what the occasion was. You would have thought someone had died. I guess it is that rare that Suzanne is caught wearing a dress. The plot was pretty easy to figure out but for me it was about Suzanne, Grace and April Springs then it really was about the plot. Of course, I can not forget all of the yummy donut recipes that were packed into this book. I will have fun trying them all out. Yes, all as my mouth was watering reading up on them all. I plan to go back and check out the other books in this series. Illegally Iced is worth the read.
Jessica Beck