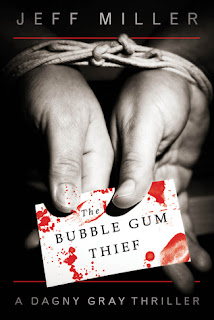 A kid is maintaining his parents shop when a man comes in. The kid goes into the back store room for more supplies and when he comes out the man is gone. All that is left is a call with a piece of gum stuck on the back. The card reads “This is my first crime. My next will be bigger”. All the guy stole was a pack of gum.

Special Agent Dagny Gray is on the case. However when things take a turn for the worse, things get personal for Dagny.

So when I first read the premise of the premise of this book, I was very intrigued to read this book. Unfortunately for me this book did not hit the spot. Not to say that I did not like it. I just wanted the story line to move faster. In addition, I expected as the crimes got bigger that more focus would be on the killer and the crimes but the crimes were described as more of a passing thought. Which is probably why when the killer first started out by committing his crimes, he victims did not really speak up.

What did stand out for me in regards to this book are the characters. This book is more character driven then about the crimes. Which I did feel for Dagny. She was a good female lead and I did feel the need to cheer her on to solving the crimes but I just wished that the balance was there. Between the characters and the rest of the story. However, the Bubble Gum Thief is a nice introduction to a new author. Because just like the thief states on his calling cards, “My next will be bigger”. I expect Mr. Miller’s next book to be bigger.