The Mozart Conspiracy is both music to by ears and a breath of fresh air! 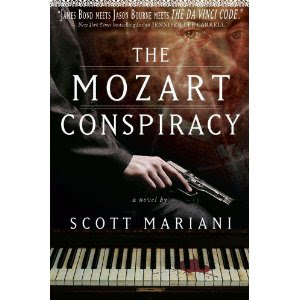 It has been two months since, famous opera performer, Leigh Llewellyn’s brother, Oliver passed away. Oliver was in Austria conducting research on Mozart. He had come up with the theory that Mozart was murdered by the Freemasons. Leigh decides to pick up where her brother left off. She is joined by her former flame and former British Special Air Service Officer, Ben Hope. What Leigh and Ben discover will have them running for their lives.

The Mozart Conspiracy is both music to by ears and a breath of fresh air! This book is the second Ben Hope novel but the first one I have read. It can be read as a stand alone novel. The first book is The Alchemist Secret. I have read many mystery/thriller novels and while there were some flaws, for the most part this book was right on par. The beginning started out at a rapid pace but than the story line started to slow down and than it would pick up again when it would flash to the past. I thought the ending was alright. Though, I liked that author, Scott Mariani played on the idea of a famous icon like Mozart being murdered. I do plan to check out the first book.
Scott Mariani