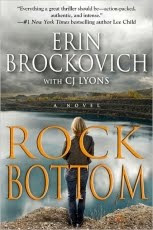 Angela Joy Palladino used to be called “The People’s Champion”. This is because she fought for the people and what was right, no matter what the odds were against her. Angela had a good life. She worked as a radio personality. That is until a fatal incident left Angela packing up all her belongings and her son, David and moving back home. A place that she left ten years ago and did not look back.

Angela is ready to start over. When Angela’s new boss is murdered. Things go from good to bad real quickly. Angela teams up with her boss’s daughter, Elizabeth to solve her father’s murder. Some people in town don’t appreciate Angela sticking her nose where it does not belong. Angela better watch her back or she will end up buried ten feet under ground.

Rock Bottom is the first book I have read by Ms. Brockovich. Though, I am familiar with who she is and what she does. I am a fan of CJ Lyons. Her medical suspense novels are good. Together, I thought that these two women made a great duo. I could not tell where one author left off and the other one picked up. I liked Angela. She is tough but at the same time, she just wants to be a good mother to her son. This made her more human in my eyes. I liked the topic that Ms. Brockovich based this book on. It is an interesting one but an important one…environmental issues and the effects on the land, people and animals. I can not wait to see what next issue Angela battles. Rock Bottom is rock solid!
CJ Lyons Erin Brockovich