There is something magical and fun to be discovered in The Kitchen Daughter! 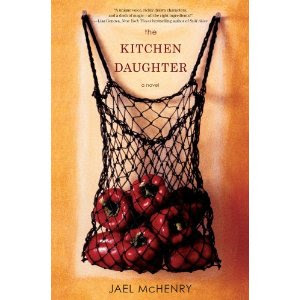 Ginny Selvaggio has Asperger’s syndrome. It is a disorder that causes people to not be able to communicate sociably and effectively with other people. Unfortunately, there is no cure currently. For this reason, Ginny is very protected by her older sister, Amanda. When Ginny and Amanda’s parents die, Ginny seeks solace within the confines of the kitchen. There Ginny finds old recipes. She takes to trying them out. The first one is a recipe for the “Best Ribollita”. The recipe was Ginny’s Italian grandmother’s. The smell of the “Ribollita” summons Ginny’s grandmother. Soon, Ginny is visited by other ghosts of the past. Ginny is hoping that she can summon her parents.


The Kitchen Daughter is the debut novel from new author, Jael McHenry. Instantly, I fell in love with Ginny. Her disorder did not affect her in anyway from living a normal life or doing the things she loved. I felt sorry for the rest of the family that they worried more about Ginny and life than to sit back for a moment and enjoy the little things. I loved Ginny’s grandmother. She was pure Italian. There was quite the electric cast of characters that make appearances in this book. The recipes featured throughout this book had my mouth watering. I now have to try out every recipe. This is the time when I actually wish that with every recipe there was a scratch and sniff by the recipe so that I could smell the wonderful scents and not just envision them in my head. There is something magical and fun to be discovered in The Kitchen Daughter! I look forward to more to come from Ms. McHenry.
Jael McHenry