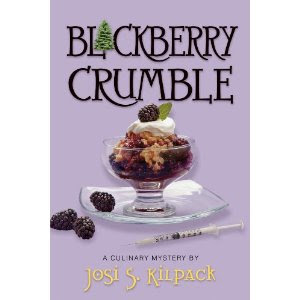 After being involved in helping to solve several murder cases, Sadie Hoffmiller has gained a reputation. A reputation that Sadie would rather not have. Unfortunately for Sadie, the harder she tries to not get involved, she always seems to fine herself in the wrong place, no matter what she does. Sadie’s reputation has caused the townsfolk to gossip even more. Also Sadie, is trying to figure what where she and her boyfriend, Peter Cunningham are in their relationship. So when, May Sanderson wants to hire Sadie to travel with her to Portland, Oregon to help solve her father’s murder, Sadie decides this might be the break she needs to get away from it all for a little while.

I like this series. Blackberry Crumble is the latest yummy, treat in the Culinary Mysteries series. Sadie is a fun character. She is just your normal, everyday woman who just wants to bake, have a boyfriend, and solve a few murder cases on the side. While, this book took a little longer for me to get into it, I still did like it. Once it picked up, I had fun reading about all the mayhem that Sadie got into. It is amazing how Sadie solves a murder as it is like she does it purely by accident. An added bonus that comes with each of these books are the delicious recipes inserted throughout the book. For example, there is always the featured recipe that goes with the title of the book. In this case for Blackberry Crumble, the featured recipe was…Blackberry Muffin Tops.
Josi Kilpack