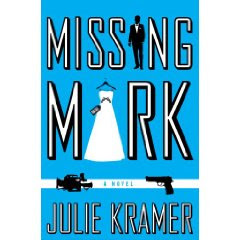 Readers were first introduced to Channel 3 television reporter, Riley Spartz in author Julie Kramer’s debut novel Stalking Susan. Now Riley is back in getting in over her head again in Missing Mark.

Riley has recovered from her scare in Stalking Susan and is ready to get back in action. She sees an ad for a wedding dress for sale. To anyone else they would just glance at the ad and maybe pass it over but not Riley. She believes there is a story behind the ad. She contacts the owner, Madeline to meet with her about the dress.

Riley learns that Madeline has been stood up at her own wedding. Her husband to be, Mark was last seen at the wedding rehearsal dinner. Riley smells a story here but her boss has other ideas. She wants Riley to investigate the disappearance of a prized missing bass from an indoor aquarium.

As if that wasn’t bad enough, Riley’s next door neighbor George is a very odd character. He holds garage sales as an almost monthly event. How much junk can one person truly own?

Having never read Stalking Susan, I don’t have much to compare to her first book. Though, I do have to say that I did like her latest Missing Mark. I liked the play on words for the title of the book as the missing groom’s first name is Mark. Riley is very likeable. She reminded me of the twenty-first century version of Nancy Drew. While there are not a lot of twists and turns, there are a enough to make an mystery fan happy. I can’t wait to check out the nest release but till then I plan to read Stalking Susan.

Park Avenue Princess said…
Oooh this one looks great Cheryl! I can't wait to read it!