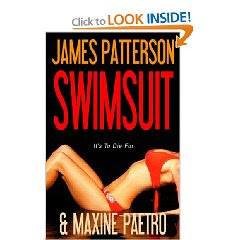 Famous model Kim McDaniels has been kidnapped from a photo shoot in Maui. She wakes to find herself in the truck of a car. At first she thought it was her boyfriend Doug, playing a joke on her but she soon realizes that her kidnapper is not Doug. Unfortunately, Kim won't be able to model her way out of the predicament she has now found herself in.

Kim's parents receive a phone call notifying them that their daughter has been kidnapped and to come down to Hawaii immediately. They get the first flight out that they can.

Ben Hawkins is a former cop. He now works as a reporter for the L.A. Times. He scores the assignment of Kim McDaniels's kidnapping. Ben thought he could become the hero and swoop in and save the day. In doing so he hoped to get an exclusive rights to include in a novel he would like to write from this experience. Ben's investigating leads him down a dark, sinister path of betrayal, lust, and double crossing.

First, I have to admit that I have tried reading Mr. Patterson's work and it does nothing for me. I decided to try audio books. What I discovered is that I can get into these stories better when I am listening to them. Have said that, the reason for this has to do with the narrator. He really brought this story to life. The last book I listened to by Mr. Patterson was Run for your Life. Now that one was just ok but Swimsuit really cranked up the suspense. This story is way dark, gruesome, twisted, and fast-paced. Just the way I like my mystery thrillers. If you have never tried James Patterson then you should try this book. It is a stand alone novel.
James Patterson Maxine Paetro