It could Only be You 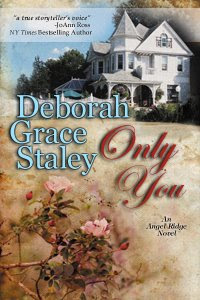 Come meet the town folks of Angel Ridge, Tennessee. The town was founded by some of the richest families around...The McKays, the Wallaces, the Houstons, the Joneses, and, the Craigs. You could say that these people all had a rival with each other in the aspects of which family had more money. One way for them to show their wealth is to build this building or that building or to make the largest contribution. The only family that didn't spend their money frugally was the Craigs. They were happy living the simple life.

Josie Allen has returned home to work as a librarian for the Angel Ridge Library. Josie receives a phone call at work from a man named Cole Craig. Cole is the local handyman. He tells her that he noticed that there was water running from her home. It seems she has a busted water pipe.

After the first visit, Cole decides that he wants to get to know Josie better. It takes a little while to get Josie to warm up to him but eventually he wins Josie over and she agrees to go out on a date with him. Now all Cole needs to do is figure out where to take Josie. Luckily for him Dixie Ferguson, owner of Ferguson's Diner and match maker extraordinaire has stepped in to help Cole. Will Cole and Josie be a perfect match in heaven?

Only You is the first book in a brand new series by Deborah Grace Staley called The Angel Ridge Series. Only You is a charming and sweet story. At first you think that Cole and Josie come from two totally different walks of life but after getting to know them you realize that they aren't that so different. This book reminded me of the hit television show...The Gilmore Girls. Josie is Lorelai but not as kooky. Cole is Luke. The quiet, simple but sexy guy next door. Anyone looking for a good romanctic read, so try Only You. This series can only get better from here!

Kaye said…
This was such a sweet book, I haven't written my review yet but I really enjoyed it. The next in the series should be good.
Have a great weekend and happy 4th of July.
July 2, 2009 at 7:18 AM

Darlene said…
What a pretty cover. This book sounds wonderful. I loved the Gilmore Girls-anything to remind me of that would be awesome.
July 2, 2009 at 1:40 PM

Sheila DeChantal said…
This book caught my eye and your review is really good. Sounds like something to keep a look out for.