Book Tour: Madman in The Woods 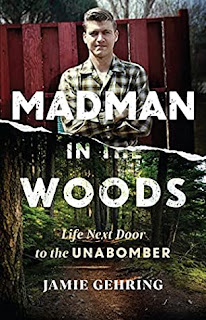 As a child in Lincoln, Montana, in the 1980s and '90s, Jamie Gehring had no idea that Ted Kaczynski--the self-sustaining hermit in the adjacent cabin--was anything more than the neighbor who brought her painted rocks as a gift. Ted was simply Ted, and erratic behavior, surprise visits, and chilling events while she was riding horses or helping her dad at his sawmill were dismissed because he was "just the odd hermit." He was, in fact, the Unabomber, for seventeen years mailing explosives to strangers, the longest-running domestic terrorist in American history.

As an adult with this knowledge, the innocence of her youth robbed, Gehring needed to reconcile her lived experience with the evil that hid in plain sight. In this book, through years of research probing Ted's personal history, his writings, his secret coded crime journals, her own correspondence with him in his Supermax prison cell, plus interviews with others close to Kaczynski, Gehring unearths the complexity, mystery, and tragedy of her childhood and the hermit on the hill. And she discovers a shocking revelation--she and her family were in Kaczynski's crosshairs.A work of intricately braided research, journalism, and personal memories, this book is a chilling response to the question: Do you really know your neighbor?

I found this book to be a very interesting read. Everyone can say that had that one "weird" neighbor but not everyone can actually claim that they had the Unabomber as their neighbor. I know a little about Ted aka the Unabomber but not a lot. With this book, I felt like I did get a more in-depth insider's view as to the man behind the persona.

Jamie did a really good job of conducting through research as well as reconstructing her memories. To be honest while Ted was a bit "odd" and reserved in his mannerisms, I would not have suspected him to turn out to be the Unabomber. Readers who like to read nonfiction or who are very interested in the Unabomber will want to check out this book.