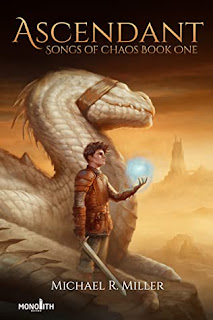 Holt Cook was never meant to be a dragon rider. He has always served the Order Hall of the Crag dutifully, keeping their kitchen pots clean.Until he discovers a dark secret: dragons do not tolerate weakness among their kin, killing the young they deem flawed. Moved by pity, Holt defies the Order, rescues a doomed egg and vows to protect the blind dragon within.But the Scourge is rising. Undead hordes roam the land, spreading the blight and leaving destruction in their wake. The dragon riders are being slaughtered and betrayal lurks in the shadows.Holt has one chance to survive. He must cultivate the mysterious power of his dragon's magical core. A unique energy which may tip the balance in the battles to come, and prove to the world that a servant is worthy after all.

This book is the type that can be enjoyed by readers of all ages. It has a bit of everything...adventure, a wonderful world, great storyline, and engaging characters. Instantly, I was invested in this story, but I will admit that a big part was due to the fact that I listened to this book as an audiobook. The narrator, Peter Kenny did an amazing job of narrating this book. His voice is clear, and he was able to bring each character their own voice.

Holt and Ash make a great team. Together they grew to a good team and found their strength. Holt is someone that readers will be able to relate to as well as cheer for. Ash may have been the runt of the dragon brood, but you would never believe that as he grew up into a full-grown dragon. The only complaint that I have is that I did find that this book did seem to be a bit too long. Yet, I do look forward to continuing the journey with Holt and Ash in book two.