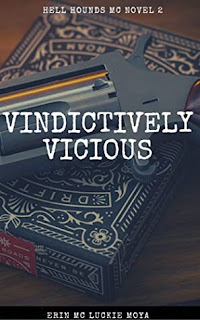 He is a man with a checkered past. When he went off the grid before officially joining the club, he did things that no man could ever be proud of.And now? Now he's the Sergeant in Arms of the Hell Hounds MC - a position he has been honed for. He wasn’t made to lead, but to protect his club? Now that he could do.Imagine his surprise when he discovers that the sweet, graphic designer friend of Sadie Priest - Vivenne is pregnant after one passionate encounter with her. Only, Vivienne is not who she says she is, and now their club is at war because he sullied the Don’s princess.But Ammo is not quite ready to walk away from his small, budding family - no matter how much he doesn’t deserve them, and Sadie would die for her friends. So, The Hell Hounds MC find themselves ready to burn the world down for Vivienne.
I couldn't pretend to be uninvolved anymore, and I was done sitting here as a pawn in my father's world. If I was going to survive this and get back to Ammo, then I needed to step up and handle the family business. My father was still the Head, but as his little girl, I was the neck - and I would turn his head, moving our people into whatever position they needed to be so that I could buy my freedom - even if that meant setting fire to old friendships and promises long forgotten.
My Review
Erin had made me a born-again fan of MC books. This series had everything that I love about these types of books...smoking hot men, strong women, steamy sex, and great storylines. Once I started reading this book, I could not stop reading. I recommend this series to other readers who enjoy MC books.
Vivienne aka Vee is no damsel in distress. She can take care of herself. She proves it to Axel's frustration and admiration. For this, I felt that Vee was evenly matched with Axel. She is just who he needs in his life and by his side. It was great to see Vee in action. She truly did stand out against this male testosterone story. Which I can count on Erin to always write strong female characters.