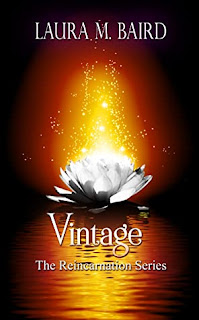 Reginald Cast and Charlotte Tremmington share forbidden love. He's a slave in 1860. She's a plantation owner's daughter. After one glorious night together, their world is ripped apart.

Charlotte is killed in a fit of rage by Julius Barclay, would-be suitor and Reginald's owner. He then blames Reginald and attempts to kill him as well. With Reginald's escape, an encounter with a vampire – the beautiful Syre – gives him a chance at eternity and a reunion with his love.

Renata Charles, a modern-day estate sales director, is enchanted by a vintage yellow dress that spurs vivid daydreams of another time. She soon learns the visions are glimpses of her life as Charlotte, and the mysterious and appealing Reggie was her lover.

When the past comes back to haunt them, their chance at forever is threatened.

Will Reginald save his beloved and finally put an end to the evil trying to keep them apart?

Reginald aka Reggie and Charlotte were in love once, but that love was tragically cut short. Now these two get a second chance. Charlotte has been reincarnated as Renata. When Reggie and Renata found each other, you could tell that there was a lot of love between them. It was evident on the easy way that they interacted with each other. In addition, the love making was filled with real heart and soul but don't mistake this for there being no steam.Laura really does know how to bring the heat. She just also writes engaging stories with characters that will stick with you long after you have finished the book. I really enjoyed this book and the concept for this series. I do want to check out the rest of the books in this series. If you like romantic vampire stories that have a great storyline, I recommend you pick up this book.