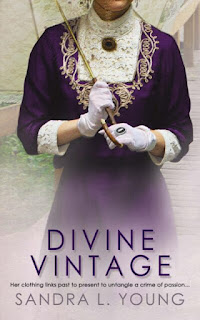 Tess Burton is always up for a vintage adventure, and she’s risked her inheritance to open Divine Vintage clothing boutique. While modeling an elegant gown from an Edwardian trousseau, her mind is opened to a century-old murder. Visions—seen through the eyes of the murdered bride—dispute local lore that claims the bridegroom committed the crime.Trey Dunmore doesn’t share her enthusiasm for mind-blowing visions, yet the appeal to clear his family’s tainted legacy compels him to join her in exploring the past. Aided by the dead woman’s clothing and diary, Tess and Trey discover that pursuing love in 1913 was just as thorny as modern day. As the list of murder suspects grows, the couple fears past emotions are influencing, and may ultimately derail, their own blossoming intimacy.
My Review
I liked this book. The premise of the story with Tess receiving visions of the past when she puts on a gown is intriguing. The way the story mixed the present with the past was nice. However, I found myself really wanting more of the past. The little snippets I understand was to help draw more intrigue, but I would have liked the passages to be longer.
They did become more prominent the further I got into the story and that is what I found myself most interested in this story. In the beginning, Trey may not have believed Tess and what she was experiencing but he came around. He did support her. The romance between them was a bit spicy.
The last hundred pages of the book is where the story really picked up speed and all came together very nicely. Readers of historical mystery books may want to check out this one. 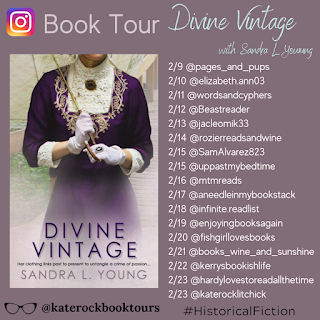