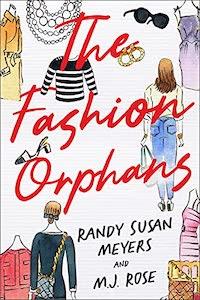 About the book:
Two estranged sisters find that forgiveness never goes out of style when they inherit their mother’s vintage jackets, purses… and pearls of wisdomEstranged half-sisters Gabrielle Winslow and Lulu Quattro have only two things in common: mounds of debt and coils of unresolved enmity toward Bette Bradford, their controlling and imperious recently deceased mother.Gabrielle, the firstborn, was raised in relative luxury on Manhattan’s rarefied Upper East Side. Now, at fifty-five, her life as a Broadway costume designer married to a heralded Broadway producer has exploded in divorce.Lulu, who spent half her childhood under the tutelage of her working-class Brooklyn grandparents, is a grieving widow at forty-eight. With her two sons grown, her life feels reduced to her work at the Ditmas Park bakery owned by her late husband’s family.The two sisters arrive for the reading of their mother’s will, expecting to divide a sizable inheritance, pay off their debts, and then again turn their backs on each other.But to their shock, what they have been left is their mother’s secret walk-in closet jammed with high-end current and vintage designer clothes and accessories— most from Chanel.Contemplating the scale of their mother’s self-indulgence, the sisters can’t help but wonder if Lauren Weisberger had it wrong: because it seems, in fact, that the devil wore Chanel. But as they being to explore their mother’s collection, meet and fall in love with her group of warm, wonderful friends, and magically find inspiring messages tucked away in her treasures — it seems as though their mother is advising Lulu and Gabrielle from the beyond — helping them rediscover themselves and restore their relationship with each other.

I have read books from both of these authors and really enjoyed them. After reading this book, I do hope that both ladies collaborate together again. This book is a feel good story about family and sisterly bond.

Gabrielle and Lulu could not be more different but at the same time they did have a lot in common. Both sisters suffered loss with Gabrielle's ex and Lulu's husband passing away. Yet, with the help of their late mother's notes from the wisdom of Chanel; these two sisters were able to help one another heal and come together.

The notes were the best part about this story. It really did seem as if their mother was communicating with them from beyond. Everyone in this story was so engaging, even Gray Lady. The Fashion Orphans by Randy Susan Meyers and M.J. Rose is a feel good, charming read.