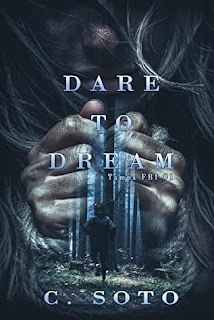 Emily, a small town psychic, was about to have a big breakthrough in life. She would become instrumental in finding a killer who was wreaking havoc in her small tourist town.

She finally would get her opportunity to work with the FBI like she always dreamed. In that dream, she never imagined it would come with a smoking hot agent.

Derrick arrived in Crystal Rivers with one thought in mind; he must find the ladies that have gone missing, before it was to late. He was racing against time trying to find the clues that would bring them home.

He never expected in the course of his work to meet a beautiful lady and fall for her. At first glance, Emily took his breath away, he knew from that moment he would protect her. He knew he could not lose sight of the girls or his mission of bringing them home.

When Emily’s dream has a prediction of another lady's capture, can they find the killer before it’s to late? The FBI relies on Emily’s dreams to find them the clues to connect other cases, hoping they can find the killer’s hunting ground and find the mistake he has made along the way.

When a body is discovered they know they are running out of time before they find the next victim.

Can they catch him before he snatches his next victim and leaves more bodies on his trail?

I did like this book a lot. The working dynamics between Emily and Derrick was very good. They worked well together. Although, I would have like to have seen Emily's abilities more prominent in this story. The story started out with Emily having images of women being kidnapped and then there was a few more visions but they were short. I would have liked to have seen where her ability helped piece the case together faster and better.

The sex scenes with Emily and Derrick are steamy but they do not overpower the storyline. I like this as while, I liked them together I did not feel like the romance should be the star of the story and it was not. This book did get me hooked enough to want to read the next book in this series.