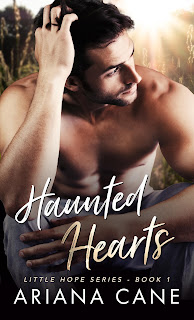 This slow-burn, enemies-to-lovers, contemporary romance is standalone, featuring an ex-military guy/jerk with a severe case of PTSD and anger issues and a woman on the run from her troublesome past. The steam level is boiling (eventually). Their life isn't easy, so some profanity is present. Has triggers (see above). It can be read as it is, but better if enjoyed as part of the series. Each book contains a story about a different couple.

Sometimes looks can fool you. But sometimes, they can’t.

The only thing Alex ever wanted was to be left alone in his secluded cabin, away from people who judge him for the scars he wears as a badge of dishonor. He got used to living with it along with severe PTSD from his years in the Navy. And he likes it just like that: alone and quiet.

The only thing Freya wants is to get her car fixed and get the hell away from Little Hope, where she got stuck thanks to a popped tire and “helpful” locals. Unfortunately, those friendly citizens of said town and fate have other plans for her: they like to stick their noses where the sun doesn’t shine. As a result, Freya becomes well acquainted (a little too well) with Alex, who is rude, messed up, and hot as hell with his huge, damaged body and hidden under the ever-present cap eyes.

After just a few days, this weird little town in Maine begins to feel like home, and Alex starts to feel more like a man and not a growly bear people constantly warn her about. But everywhere she goes, her troublesome past follows.

Will she stay at Little Hope, where bears are seemingly everywhere? No pun toward Alex intended…I think.

They say All Roads Lead to Maine. But to they end there?

If you are looking for a slow burn romance with a rough around the edges male lead, then, you need not look any further than Haunted Hearts by Ariana Cane. I can't believe this is Ms. Cane's debut novel. It does not read like the first book but the fifth book.

Alex on first introduction is someone that you would turn around the other direction to get away from him. Yet, it is understandable as to why Alex is not Mr. Manner's. He is suffering from PTSD. Freya did try to keep her distance from Alex in the beginning; however, it was like destiny was adamant to bring these two together.

It took a while before Alex and Freya hooked up. Yet, the build up until than was hot and intense. I look forward to reading the next book in this series. Haunted Hearts took me on an emotional roller coaster with engaging characters!