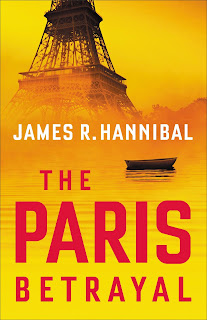 After a rough mission in Rome involving the discovery of a devastating bioweapon, Company spy Ben Calix returns to Paris to find his perfectly ordered world has collapsed. A sniper attack. An ambush. A call for help that brings French SWAT forces down on his head. Ben is out. This is a severance--reserved for incompetents and traitors.

Searching for answers and anticipating a coming attack, Ben and a woman swept up in his misfortunes must travel across Europe to find the sniper who tried to kill him, the medic who saved his life, the schoolmaster who trained him, and an upstart hacker from his former team. More than that, Ben must come to grips with his own insignificance as the Company's plan to stop Leviathan from unleashing the bioweapon at any cost moves forward without him--and he struggles against the infection that is swiftly claiming territory within his own body.

This book is right up my reading alley. I was feeling it right away in the beginning and was hooked for the first third of the story. This is not to say that the rest of the story was not good. It was and it was full of action and intensity. For some reason, I just struggled with fully being focused on this book.

When I think about it and I saw another reader's review, it clicked as to the reason why. Because I will tell you that I was puzzled. It is because there were so many different characters introduced very fast in a short amount of time. Therefore, it was kind of hard to keep everyone straight and develop any connections.

So I in turn was a bit lost and disconnected with the characters and some with the story. Other than this I did like this book and could see it playing out on the movie screen.