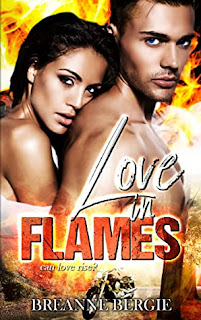 He forgot his past long ago. She’s determined to expose the truth. Together they’ll ignite an unexpected spark that threatens everything.Cassandra’s a private investigator and a workaholic to numb her past. A personal case lands in her hands and she carries a secret to the small town of Blazin. She must unravel a man’s reality to find one answer: who is Tucker Turner?Tucker’s an actor; his fame doesn’t entice her, but his beautiful blue eyes do. Women swoon over his ruggedly handsome good looks, but Cassandra mustn’t lose focus.When a fake accidental encounter uncovers the truth, she intends to break the news, but disaster explodes. She works alongside her latest assignment in a fight to stay alive with a blazing inferno destroying the small town. With their lives in jeopardy at every turn, attraction still sizzles between them. Can their love rise above the flames before it’s too late?

I have read all three books in this series. I have to say that this one is the steamiest out of the three. Once Cassandra and Tucker got their hands on each other, they could not and would not stop. There was a point in the story where like every other scene for about three scenes was a sex scene. If I was a smoker, I would have needed a cigarette afterwards.

This book had a bit of a mystery element to it as well. It involved Tucker. Which I kept trying to figure out what the secret was. When it was revealed; I had both an OMG and Ah Ha moment. This book just like the prior two books is a quick read. I would recommend that readers do read all three books in chronological order. The stories as well as the characters will be fully appreciated this way.

The last line in this book was great:

"Love finds people at uncertain times, that's exactly what happened to us and I wouldn't change one moment of it."

Purchase all three books in this series here.