The Game of Satori + Giveaway 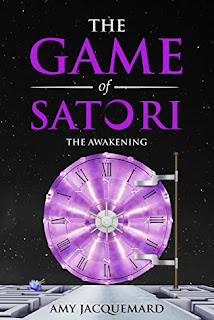 The Game of Satori, a virtual reality escape game that hacks your mind--delving deeply into your subconscious, pulling memories, thoughts and beliefs to the surface that have long been suppressed. All in the name of Satori--sudden enlightenment. The winner will claim one million dollars and the promise of a new life.

Do you have the guts to see what's hidden there?

It's just a game... isn't it?A new reality show is taking the nation by storm. Satori is a game of escape, only the rooms are not the typical one-hour affair. In Satori’s virtual reality game, players have five days to solve each room’s cutting-edge maze filled with physical, emotional, and psychological puzzles. All in the name of reaching Satori—translation: “sudden enlightenment.”Produced by the infamous Jacob Novak, known for creating revolutionary technology that pushes the bounds of imagination and his half-brother, Gabriel, the iconic transformational guru whose personal growth platform ‘awakens your aliveness,’ Satori guarantees not only to alter the lives of the contestants through the supernatural rooms, but also the lives of those who tune in to watch.Ellie, twenty-two, who recently embezzled money to help a friend escape deportation—and dodge her own eviction notice—finds herself on the run only to be randomly selected from an open call to the public: join the new game Satori. The prize is one million dollars and a get-out-of-jail-free card.The game quickly becomes a heart-racing labyrinth through a series of psychological tests meant to break—or transform—each contestant. As other contestants struggle and fail, Ellie holds on through sheer desperation, knowing that her sanity and future depend on her tenacity to become the first survivor of Satori.

This is not your typical escape room game. It is not a horror but more of an intelligential game. The producer really did his research on all of the contestants. Therefore, as the group moved from one room to the next, they encountered personal demons from their past. Which is more "scary" than disarming a trap.

For the most part I was sympathetic to the group as I learned about each of them and their pasts. However, I never fully embraced them. So I felt like I saw them and interacted with them but at a slight distance. The group does do a bunch of soul searching. While, there may be only one "winner" for the game; they all came out winners because they embraced their past and grew from it.

Amy Jacquemard is a coach, trainer, and writer of the new novel The Game of Satori.

create a more engaged and fulfilled life. Amy loves to share her discoveries, not only in

her coaching and training, but within her stories.

Amy has spent much of her work life playing in the field of training, spirituality and

education. Before transitioning into full-time writing and coaching, Amy worked for

on-line courses for some of the top Fortune 500 companies.

When she’s not writing or coaching, Amy can be found in the mountains hiking, skiing

and golfing, as well as creating treasure hunts for her family and friends.

Amy lives in sunny Denver with her husband and small white dog, Max.