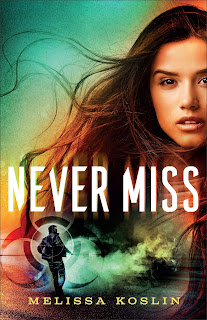 Former CIA sniper Kadance Tolle possesses a special set of skills and a rare pedigree. She comes from a family of assassins, and by saving Lyndon Vaile's life she risks being found by them. Despite the danger, Kadance feels compelled to help Lyndon discover who is after him--and his research that seems to prove that the Ebola virus was manmade and is about to be weaponized.

With shadowy figures pursuing them and a Mastermind watching their every move, Kadance and Lyndon must scramble to stop an impending bioattack at the State of the Union address. But their warnings fall on deaf ears, and it becomes increasingly clear that there's no one they can trust--except perhaps each other.Strap in for a breakneck story that will have you up all night, hurtling toward the last page as the clock ticks and time runs out.

I was drawn to this book because of the premise of the story. The beginning did grab me right away. There is mystery surrounding Kadance and her background. A woman of mystery for sure. While, I did get to know her better and her background as the story progressed, I do feel like she was holding back still a bit. Whereas, Lyndon was too at the start but he laid it all out there afterwards. Lyndon is very intelligent with his three doctorate; this can lead to the character talking "above" a normal reader's grasp. I liked that Lyndon did not do this.

The story had a good fast pacing. Normally, this would not be an issue but it suffered from the characters. While, I liked Kadance and Lyndon, I felt a bit of a disconnect towards both of them. Therefore, I found myself going through the motions of reading but not absorbing the story at times. The last third of the story is where I did become fully engaged again. So for me the beginning and ending were the strongest but the middle was just fine. Still this was a good read.