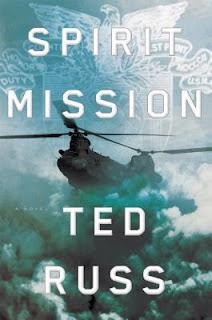 An MH-47G Chinook helicopter departs formation in the Iraqi night. The mission is unauthorized. Success is unlikely. But to save a friend, Sam Avery and his crew of Night Stalkers have prepared for one last flight.

ISIS operatives in Tal Afar, Iraq, have captured American aid worker Henry Stillmont. Avery knows Stillmont as “the Guru,” the West Point squad leader who taught him about brotherhood, loyalty, and when to break the rules as a young cadet twenty-five years ago. Sam will risk his career and his life to save him.

As they near their target, Sam reflects on his time in the crucible of the United States Military Academy. West Point made Sam the leader he is. But his fellow cadets made him the man that he is. The ideals of duty, honor, and country have echoed throughout his life and drive him and his comrades as they undertake their final and most audacious spirit mission.

Hardcover, 336 pages
Expected publication: November 1st 2016 by Henry Holt and Co.
My Review
People who know me know that I love military stories. With this book I was expecting to get action and a good storyline. Having read many of these types of books my standards are really high for this genre. Well I have to tell you that this book far exceeded my expectations. This does not read like a debut novel. It reads like the 10th book from Mr. Russ. Which I can't wait to read Mr. Russ's 10th book. I know he will be around for a long time.
I could not stop reading this book. I literally was connected to all of the Night Stalkers. Yet, to be honest it was not so much about the action that really won me over with this book as it was the comradery involving all of the Night Stalkers that had me from the beginning. It helped by having me the reader get to know them from their time together in the past. Mr. Russ has a winner on his hands with Spirit Mission!
Warning as the "f" word is used in this book. Yet, if you are going to read a military book then you should expect this.
Ted Russ