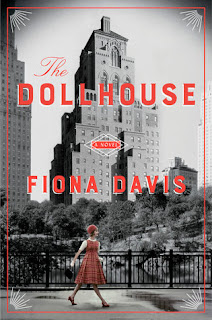 THE DOLLHOUSE tells the dual storylines of two women who, decades apart, are enthralled by the allure of the real-life Barbizon Hotel for Women, which, from 1927 to 1981, was an exclusive residence for young, single women who wanted to make it in the big city, including Liza Minelli, Grace Kelly, Joan Crawford, Joan Didion, and Sylvia Plath.

When Davis walked through the doors of the Barbizon 63 a few years ago, she was struck by the history of the building and conceived of a novel: partially set in the Barbizon of 1952, and partially in the condos of today. When Darby McLaughlin arrives at the Barbizon Hotel in 1952, secretarial school enrollment in hand, she is everything her modeling agency hall mates aren't: plain, self-conscious, homesick, and utterly convinced she doesn't belong. Yet when Darby befriends Esme, a Barbizon maid, she's introduced to an entirely new side of New York City: seedy downtown jazz clubs where the music is as addictive as the heroin that's used there, the startling sounds of bebop, and even the possibility of romance.

Over half a century later, the Barbizon's gone condo and most of its long-ago guests are forgotten. But rumors of Darby's involvement in a deadly skirmish with a hotel maid back in 1952 haunt the halls of the building as surely as the melancholy music that floats from the elderly woman's rent-controlled apartment. It's a combination too intoxicating for journalist Rose Lewin, Darby's upstairs neighbor, to resist—not to mention the perfect distraction from her own imploding personal life. Yet as Rose's obsession deepens, the ethics of her investigation become increasingly murky, and neither woman will remain unchanged when the shocking truth is finally revealed.
My Review
Besides the WWII era,the 1920's, and the Western era; this was about the only eras I was really into regarding reading stories. Yet, I think I might have just found a new era to add to my list. That is if every other book in this time era is as fabulous as this book. This book does not read like a debut novel. It reads like it came from a seasoned professional. I can't wait to see what author, Fiona Davis comes out with next.
I loved everything about this book from the era, the language, Darby, Esme, Sam, and Rose, and the beginning, middle, and ending. Sometimes when there are dualing storylines, they do not always flow together or one side is stronger then the other. I felt that both Darby and Esme's story was as strong as Rose's. I loved the connection between the two time periods. There was a surprise or two thrown in the story that I did not see coming.
Classic line in the book "Now, Paul comes from money but is dumb as a box of hair."
Don't forget to book your reservation and pick up a copy of The Dollhouse. A must read and a break-through winner from author, Fiona Davis!
Fiona Davis