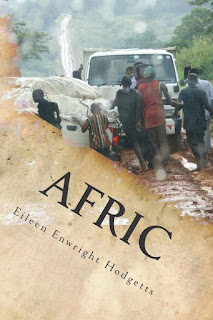 A drama ripped from today’s headlines

1963 As European colonists flee the Congo, a witchdoctor finds an abandoned child and teaches him the power of hatred. A hundred miles to the east, six American hippies on a joy ride across Africa, crash their VW bus in to a cemetery. While they wait for repairs they scandalize the local missionaries and Brenda Carter impulsively marries an African student.

2013: Brenda Carter brings Sarah, her deeply troubled granddaughter to Africa to explore her roots and meet her grandfather; the man Brenda married and abandoned fifty years before. When a Peace Corps worker is murdered, a baby is kidnapped, and all contact with the outside world is severed by a torrential rain storm, Sarah becomes an unwilling investigator making the connection between the abandoned boy from the Congo, the truth behind her grandmother’s marriage, and fifty years of undercover CIA involvement in the politics of Africa.

A compelling tale of Africa today where witchdoctors co-exist with modern medicine, where warlords carry cell phones, and where one small nation stands at the cross roads of America’s War on Terror.

This book could easily be a three star book. In fact, I almost did rate this book as such. The only reason that I did not was because of the story itself. I was transported to Africa and the trials and tribulations of this country. It makes me so grateful that I live in the US. Yet, when I read books featuring out countries and what the people of those countries are dealing with like warlords, rape, and starvation to name a few, it makes me sad. Thus the reason I am glad that there are authors like Eileen to help share these stories to hopefully make others take action and help.

Ok, back to the book. For the most part I did enjoy this book. I did not find any reason for the constant switching of names for Sarah aka Swot. One moment she would be known as Swot and the next as Sarah. Almost every one she met called her by one name or the other. For me, if you are going to be called another name then just go with it and not the constant changing. It kind of disrupted the flow of the story for me as I sometimes would get so distracted by this that it would take away from the story. Then there were other times where I found I wanted more action then the talking. Yet, the last half to third of the story did really pick up for me. Overall, a good book featuring Africa.
Eileen Enwright Hodgetts