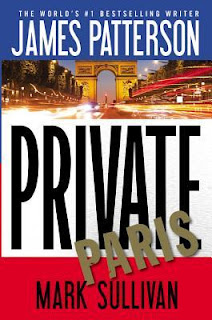 Paris is burning--and only Private's Jack Morgan can put out the fire.

When Jack Morgan stops by Private's Paris office, he envisions a quick hello during an otherwise relaxing trip filled with fine food and sightseeing. But Jack is quickly pressed into duty after a call from his client Sherman Wilkerson, asking Jack to track down his young granddaughter who is on the run from a brutal drug dealer.

Before Jack can locate her, several members of France's cultural elite are found dead--murdered in stunning, symbolic fashion. The only link between the crimes is a mysterious graffiti tag. As religious and ethnic tensions simmer in the City of Lights, only Jack and his Private team can connect the dots before the smoldering powder keg explodes.
My Review

I have only read a hand full of books by Mr. Patterson. Some by himself and others with co-authors. One of my favorite co-authors is Mr. Andrew Gross. I have read almost every book that Mr. Gross has written himself. That is one thing I do have to give props to by reading these books co-authored with Mr. Patterson is that I discover new authors. Just like with this book. Although, this is the first book I have read in this series. I thought it was good. It did move at a nice, steady, fast pace with plenty of action. Jack and Louis worked well together. In the beginning I thought that Louis and Jack were steps behind the bad guys. However they showed that they were smart and there was a few times where they even surprised the bad guys. If it was not for Louis and Jack the police would still be standing around with their pants around their ankles. My only real complaint about this book was that the story was good as was Jack and Louis; I just did not form a connection with the rest of the characters in the story thus in turn I was only half interested in what happened to them. Yet, I enjoyed this book enough to go back and check out the first book in this series.
James Patterson Mark T. Sullivan