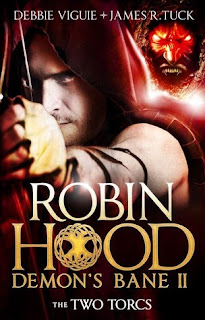 Evil is everywhere. Through terror and dark sorcery, Prince John wields the power of the throne. Lord and peasant alike meet violent ends as the Sheriff’s arcane beasts spread fear and death.

A small group of rebels oppose John, striking from Sherwood Forest...the one place his creatures cannot pursue them. Though their numbers grow, so do the forces of darkness. Unless Robin and Marian fulfill the ancient prophecy of the Two Torcs, the forest will be overrun, and England will fall.

I am familiar with the story of Robin Hood. In fact, until this book I thought that the movie version featuring Kevin Costner was the darkest version of this story. Now it is this trilogy. I have not read the first book but I really want to get my hands on a copy after finishing reading this book. In addition, I can't wait to read book three. Sadly, I have to wait a year until book three is released.

I almost feared that Robin and his men were not strong enough to battle John and his men. John is one evil mother f*cker. If I had to compare him to someone I would call him Samuel L. Jackson. Although, Robin has brain smarts to help back him up. There was not a lot of interaction between the two sides until closer to the end of the book. Yet, there was plenty of action happening in the story to keep things interesting. Both authors did an great job as I could not tell where one left off and the next one picked up. This book is a keeper.
Debbie Viguie James R. Tuck