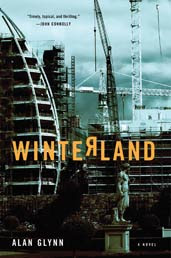 Two men with the same first name, Noel die on the same night. Is this just a bizarre coincidence or is there some connection to these two men’s deaths? Both men died in different ways.

The first was Noel Rafferty, who was part of a Dublin gang. He was known as “Grassy Noel” because he enjoyed partaking in smoking marijuana over hash. Grassy Noel was one of the top lieutenants in the gang.

The other Noel was also from the Rafferty family. He was the older Mr. Rafferty. His death was being ruled as a tragic accident.

No one believes the two deaths are connected. The only person who does is Gina Rafferty. She will stop at nothing to get justice for her family.

Winterland by Alan Glynn is the first book I have read by this author. I thought it was pretty good. It started out alright but lost some steam throughout parts of the books. Though, the ending was good. The only person I really found of interest was Gina. When she wasn’t in the scenes than I didn’t really pay attention to what was transpiring between the other characters. What made Gina appealing to me was her drive and determination to uncover the truth behind the deaths of her family members. Overall, Winterland is a pretty good novel worth giving it a try.
Alan Glynn