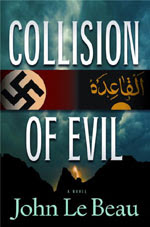 I would like to thank Mystery Book Promotions for letting me be a part of this book tour.


American tourist Charles Hirter was out taking a hike, enjoying his vacation in Austria. Sadly, Charles realized too late that this hike would be his last. Charles’s body is discovered. His head was bashed in.

It has been a while since Robert has seen his brother. It came as quite a shock when he received a phone call that Charles was dead. Robert travels to Austria to identify for the body. Franz Waldbaer, the lead detective tells Robert that the authorities can handle the case and Robert can go home to the states. Robert will not leave till he learns why Charles was murdered. Together Franz Waldbaer and Robert team up. What they discover is of importance of national security.

Collision of Evil is author, John J. Le Beau’s first novel. I thought he did a pretty good job. Collision of Evil is what I would call an international thriller. At the beginning of the book, Mr. Le Beau shares true events about World War 2 bombs that were dropped off in Salzburg, Austria. Unclaimed ones were discovered. This helped set up the plot for this book. As far as this book is considered, I do think readers will enjoy this book. It had plenty of action and suspense. The two main characters Robert Hirter and Kommissar Franz Waldbaer made a good duo. With Robert’s drive to avenge his brother’s death and Franz’s determination, I feel bad for any one who gets in their way. Collision of Evil is worth a look.


“John J. Le Beau is giving away a signed copy of his book, Collision of Evil, to one lucky tour visitor. Go to his book tour page, enter your name, e-mail address, and this PIN, 5090, for your chance to win. Entries from Cheryl's Book Nook will be accepted until 12:00 Noon (PT) tomorrow. No purchase is required to enter or to win. The winner (first name only) will be announced on his book tour page next week.” 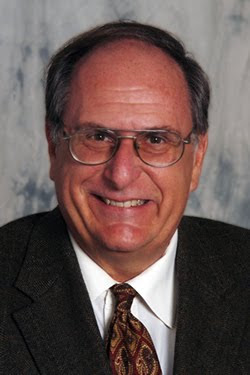 Dr. Le Beau is also Chairman of the Partnership for Peace Consortium’s Combating Terrorism Working Group (CTWG), which enjoys a broad international membership. The CTWG is currently addressing the issue of intelligence cooperation against the terrorist target.

Dr. Le Beau is a former Senior Operations Officer who retired from the U.S. Central Intelligence Agency (CIA) in 2005. Most of his intelligence operations career was spent on assignment outside of the United States, including in locations experiencing active terrorism. His intelligence duties included assignments as chief of an operational facility in Europe engaged in counter-terrorist and counter-proliferation operations and intelligence collection, Program Manager of a human and technical collection program involving the Middle East, Operational Chief for an intelligence collection program directed at transnational issues and a counter-insurgency officer in an active conflict area.

In addition to several classified intelligence assessments for the United States Intelligence Community, Dr. Le Beau has authored various articles and papers on the topics of international terrorism and insurgency.
John LeBeau

misterreereeder said…
It was a great book by this first time fiction author. It is interesting that there will be another book featuring the same two main characters. Can't wait to see how it shakes out.
January 22, 2010 at 5:25 AM

Book Trends said…
Thanks for sharing your review! Sounds like a good read - I especially like the idea of a series character.
January 22, 2010 at 4:18 PM

Josette said…
I quite enjoyed this book and learnt a lot from it! An okay thriller of a story. :)