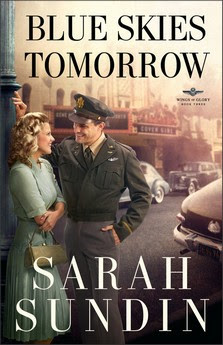 Helen married when she was young. Now, Helen is the mother to two years old, Jay-Jay and a widow. Helen’s in-laws don’t approve of the things that Helen does and they expect her to remarry the guy that they choose as they have to think of their grandson.

Lt. Raymond Novak has been a pilot instructor for four years. The funny thing is that Lt. Novak has no combat aviation experience himself. Lt. Novak receives orders from his boss that it is now a requirement that all instructors have experience. Lt. Novak knew this day would come but still he wished that it didn’t. Due to a chance meeting, Lit. Novak and Helen start hanging out together. Their friendship than turns from friends to a couple. Though, Helen has to keep their relationship a secret from her in-laws.

Blue Skies Tomorrow is the third and final book in the Wings of Glory series. What I liked the most about this series is that Mrs. Sundin really brings to life her characters. In each book she made sure of every detail. Helen and Lt. Novak made a cute couple, dispute the age difference. Though, it was easy to see how Helen has had a crush on Lt. Novak since she was a little girl. He is tall, handsome and has a kind heart. Helen has a bit of a stubborn streak in her that I was not expecting. Helen did a good job of defusing her in-laws when it came to her life and her future. Helen and Lt. Novak both came with baggage but they eventually learned to let it go and start with a fresh beginning. This book finished the series on a high note. Blue Skies Tomorrow has drama, romance, great characters and it soared!


“Available August 2011 at your favorite bookseller from Revell, a division of Baker Publishing Group.”

Sarah Sundin said…
Cheryl - thank you so much for the lovely review! I'm so glad you enjoyed Ray & Helen's story.