HOW TO BE AN AMERICAN HOUSEWIFE+ More 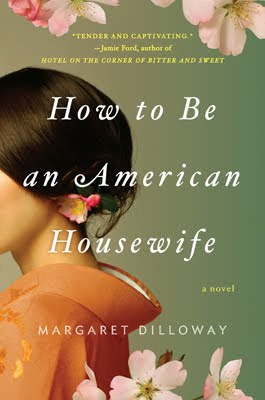 Shoko came from Japan. She lived there with her father, mother, brother and sister until Shoko was about nineteen. During the time that she lived there, she and her family had to deal with the Americans. Most of the Americans did not like the Japanese and visa versa. Though, the only way for Shoko to leave Japan is to find and marry a nice American boy. Shoko does find one. His name is Charlie. They get married and move to America. Years later and two children, Shoko wants to return to Japan before it is too late. Though due to a bad heart and impending heart surgery, Shoko can not go. Shoko’s daughter, Sue travels to Japan for her mother. What Sue learns in Japan will change her life forever.

There are not many books that spell bind and blow me away. I am happy to report that How to be an American Housewife did just that and more. For the whole time that I was reading this book, I forgot about everything else and just read this book. I could not think about doing housework (which I had lots of to do) until I finished this book. Shoko really made the story for me. She may be quiet but when she speaks, she has something to say and you better listen. Also, Shoko is stubborn as a mule. When she has her mind made up about something, you just have to jump on the train or be left behind. Shoko’s husband Charlie learned this many of times but he still tried to rein her in every time. In the beginning, I thought that Sue was uncaring but it was when she traveled to Japan that I got to know her better and felt sorry for her. Shoko’s story about when she was living in Japan and the past leading up to the future was my favorite parts of this book. How to be an American Housewife is a must read. I will be recommending this book to all my reader friends but they are going to have to purchase their own copies as I am not lending my copy out. I can not wait to see what author, Margaret Dilloway has in store next.


Topic: What type of language barrier is there between Japanese and American?" How did you bridge that barrier?"

A large part of the Japanese-English language gap is in, of course, pronunciation. For example, no matter how hard she tried, my mother could not say an R. Why I was named Margaret is anyone’s guess; from her mouth it came out, “mah-gah-let.” (Interestingly, I recently got a letter from a reader who said her name is also Margaret and has a Japanese mother; she also didn’t know why her mother chose a name difficult for her to pronounce!) The alternate name, says my dad, was Mary-Margaret, but my mother thought it should be spelled, “merry,” and found “Mary” confusing.

Another barrier really comes from a cultural standpoint rather than strictly language, context rather than meaning, which I’m not sure we ever really bridged sufficiently. Japanese don’t tend to use sarcasm the way we do, to make jokes and so forth. And my mother did not understand irony. For example, one day I was watching the John Waters movie CRY-BABY, which is, if you don’t know, a send-up of teen musicals starring Johnny Depp. My mother walked in and I thought she would get offended by its over-the-topness, but she sat down and watched it. “Now see, this good movie,” she said. “They should make all movies like this, old-style.” She loved it! But did not get the irony or humor at all.

So the regular old generational misunderstandings became huge; I did not understand her lack of comprehension of irony, and didn’t know it came from her culture. I thought she lacked the education or intelligence, frankly, to understand. She, in turn, often misconstrued what I said; things I said as jokes became insults to her. Link this with some teenage hormones, the eternal mother-daughter rollercoaster, and the age gap, and we did not have a good time.

There was another language barrier that came from culture. My mother, as a good Japanese mother, took it upon herself to point out any perceived flaws in my appearance, behavior, or study habits. She’d make no bones about telling me my face looked fat (at 5’9” and 125 pounds); that I was purposely unladylike for not wearing a slip under my dress; or that I must be bakatare (literally translated to “shithead” but generally, “idiot”) for messing up on a test. In her mind, this was good mothering and complete truthfulness to help me; in my mind, it was a wretched attack on my self-esteem.

The thing is, I’m sure my mother thought she was far more liberal than her mother had been, and that I had things easy. And in some ways, I certainly did; I always had plenty to eat, and there was no war on my soil, no bullets being shot at me, so I had nothing to complain about, did I?

Once I left for college and got a little distance, I told her that I didn’t like being spoken to this way, that I felt overly criticized. She softened a bit, but by my second year of college had gotten ill, and everything else fell to the wayside.

I never did get to have a real adult relationship with her. But by writing this novel, I was able to finally do that. I understand where she was coming from much better now. It’s fiction, so I made up a large portion of these characters—their motivations, their inner stories—and the plot. Yet fiction helped me realized some big truths about the relationship with my mother. I am able to think about what she was like as a person, not just my mother.