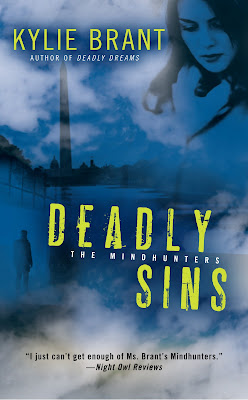 I want to thank author, Kylie Brant for making a stop on my blog and for giving away a copy of Deadly Sins.

Book Summary
An unknown assassin has appointed himself judge, jury, and executioner, brutally taking out high-level human targets citywide. And the list of suspects is a sensitive one: an Iranian diplomat, a U.S. senator, and a vengeful priest. It's just the kind of case to test the resolve of tough FBI agent, Jaid Marlowe. Especially when her new partner is Adam Raiker, Jaid's former colleague and ex-lover. But that's history—and it left scars.

Determined to leave it behind them, Jaid and Adam dive into the most shocking investigation of their careers. But when Adam himself becomes a suspect, Jaid must choose between past and present. Her choice plunges them into a far-reaching, high-level conspiracy of shadows—and on the run not only from secrets and lies, but for their lives. Now, despite their history, they have only each other, and the desperate hope that love can keep them alive.


DEADLY SINS
The sixth installment of The Mindhunters releases August 2 and the normal anticipation of a new release is bittersweet this time. That’s because this is the final installment in the series (at least the last for now) and it’s always difficult to say goodbye to a long running series.

All the books have been stand alone titles, but the connecting thread through them all has been Adam Raiker, the enigmatic legendary ex-FBI profiler who is the head of the agency. We’ve come full circle—this is Adam’s book and early reviews have labeled it fast paced, exciting and edgy. A fitting description for Raiker’s personality!

Adam’s last case for the FBI ended spectacularly when he was captured and tortured for three days by the child killer he was tracking. At that time his relationship with FBI agent Jaid Marlowe also came to an end. Fast forward eight years. Raiker’s close friend—a Supreme Court Justice has been brutally executed and the man’s widow gets Raiker named to the task force. Someone is taking out high profile targets all over DC and leaving only a card by the body with one of the deadly sins written on it. To complicate the matter even further, one of Adam’s teammates on the case is Jaid Marlowe, the one woman he’s never been able to forget.

The deeper Jaid and Adam get into the case the more it seems to be wrapped up in his last case for the FBI. And when suspicion falls on Adam, Jaid must make a choice: to protect her career or risk everything for the one man she’s loved all these years….

So are you a series lover? Is there any second-chance couple you have a soft spot for? I’m giving away an autographed copy of DEADLY SINS to one commenter today!
Kylie Brant

PoCoKat said…
I love crime thrillers and would love to win this book!

Darlene said…
This sounds like a great series! I haven't had the pleasure of reading any of them yet, but I'd love to read this! Please enter me in the draw!

My email address is darlenesbooknook at gmail dot com.