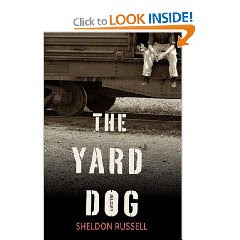 Hook Runyon is a detective. He is in charge of managing the railroad yards near the Nazi POW camp. Hook is called out to a horrific scene. A good friend of Hook’s has been run over by a train. His name was Spark Dugan and he was just a harmless person who made his home at the railroad yards. Spark’s death looks like an accident but Hook suspects it was deliberate. The question now is who would want to hurt Spark?

I like the slow, easy pace of this book. Hook Runyon is the under dog in this book. People don’t expect much from him but watch out as he will surprise you. He is smarter than people give him credit for. As much as I liked Hook, he was the only one I liked. The rest of the characters didn’t do a thing for me. In addition to the fact that there were some parts of the story were I would skim over it. The time period and location helped. Overall, The Yard Dog was more bark than bite. Unfortunately, though I was middle of the road with this book, I would still try another of Mr. Russell’s books.
Sheldon Russell

Linda Jacobs said…
Thanks for your honesty!

I know what you mean when characters don't don't grab my attention. No amount of good writing can overcome that.
October 4, 2009 at 4:29 PM

Anonymous said…
It is rather interesting for me to read that post. Thank you for it. I like such topics and anything that is connected to them. I would like to read a bit more on that blog soon.
November 22, 2009 at 7:08 PM