October 15, 2009
Thank you to Cheryl with Pump Up Your Book Promotion for letting me host and giveway a copy of this book.
I am happy to introduce you all to a new author. Her name is Stella Metaxa Mazzucchelli and her first book is titled Silk Flowers Never Die.

Stella Metaxa Mazzucchelli was born in Athens, Greece and married, aged eighteen, Riccardo Mazzucchelli, the famous Italian businessman. During their twenty-two year marriage, they lived in Zambia and London, where she became a well-known figure on the social scene, and had a brief and successful modeling career at the unusual age of 28. Fedele 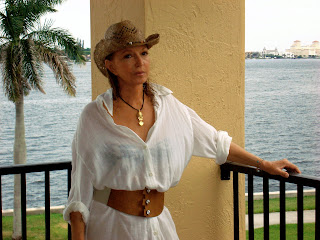 is their only child. After their divorce, Riccardo married Ivana Trump in 1995, though the marriage was short lived. Stella now lives in Athens where she brings up her granddaughter Katerina. As well as being involved in the property and renovation business, which ensures she maintains connections with London, she is also a tireless campaigner for the better understanding of schizophrenia and mental illness. Silk Flowers Never Die is her first book.

Ever since my rather successful composition ‘Ann Boleyn’s Last Days’ in sixth grade I have had an itch to write, but for a long time the passion was tucked away in a file labeled: ‘Itches To Be Scratched One Day’. When my hand accidentally chanced upon that file over the years, I was usually gripping a whiskey glass in the other. Therefore the only writing staring back at me the next morning, before the letters had turned into a blurry mess of soul-wrenching out-pour, was the title. It was only when I put my drinking days behind me that I could confidently open that file and proceed. Although terrified to death, I initially felt like a peacock with a puffed-out chest, sitting at my computer, conjuring up long flowery words you could almost put a tune to, and began the tedious job of trying to be a writer. Had I not edited poetic phrases that took me well into the night to compose, cutting and cutting again, I’m afraid my reader would have yawned and closed the book on the very first chapter. As time progressed and the nights multiplied—and even though I remained in awe of the ‘delete’ key I had on occasions accidentally pressed, causing my heart to leap out of its place—I began to become familiar with a certain style. Words became my friends, they no longer scared me. I found I could juggle them around, place them where I wanted, not caring whether they were grammatically perfect or not. It was a style I felt comfortable with: unpretentious and to the point. After all, I was no literary genius, just a simple person telling a story from the heart.

Silk Flowers Never Die is an important and intensely personal memoir, powerfully showing with humanity and humor, the difficulties that exist for any family trying to cope with schizophrenia 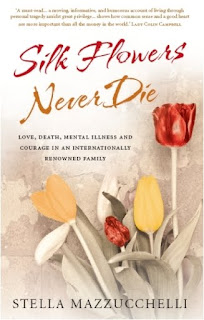 and mental distress. In a compelling story that reveals how much stranger than fiction fact is, Stella Mazzucchelli describes her determination to preserve her son from the worst effects of mental illness, while his young wife is dying of cancer.


In the process of trying to rise to these challenges, Stella is transformed from a beautiful, over-protected Society woman with alcohol issues, to an impressive, courageous earth-mother who now campaigns to reduce the stigma attached to mental illness by using her privileged position to positive effect. This moving book is informative on a host of subjects, ranging from the lifestyle of the International Super-Rich to the profundities of facing terminal illness and mental disease. Due to its intelligence, insight, and compassion the appeal of this amazing story and struggle should be universal.

Ok, So now that you all have learned a little bit about Stella and her book Silk Flowers Never Die, the best part comes.

This contest is limited to US and Canada only. Also only followers are eligible to win. Contest ends October 31st.

Share with me what you find interesting about this book and/or author.

Anonymous said…
I'm a follower. I love everything about Greece and am impressed by her determination to help her son.

Book Bird Dog said…
The anonymous note is mine - hit the wrong button.

cqueen2 said…
wow she was born in Athens, Greece..i would love to go there some day
i'm a follower

booklover0226 said…
I look forward in reading this.

Winning Readings said…
I love the cover and am intrigued by the title - I want to read this and find how the title ties into the story!

cherdon said…
I am a follower

I found it very interesting that after her divorce, Riccardo (ex) married Ivana Trump in 1995. I never knew that.

Please enter me. Thanks