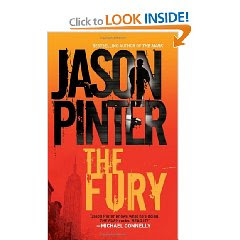 Reporter Henry Parker is back. This time he may have found himself in a way over his head.

Henry was leaving the office, when he was approached by a drug junkie. The man tells Henry…” The city’s gonna burn.” Henry may have given the guy a chance if he hadn’t been a junkie. That evening, Henry receives a phone call from the authorities. They want Henry to come down and identify a body. It is the same man who Henry ran into earlier today. His name is Stephen Gaines. Supposedly Mr. Gaines is Henry’s half-brother.

This comes as a complete surprise to Henry. There is only one was to solve this mystery. Henry will have to contact his estranged father. It seems though that Henry isn’t the only one who wants to contact Henry’s father. The authorities believe that Mr. Parker killed Mr. Gaines. It is up to Henry and his lover, Amanda to come to the aid of Henry’s father.

Another good read by Mr. Pinter. The Fury is the fourth book in the Henry Parker series. This is one of my favorite series currently out in the market today. Henry Parker is a lovable character. He may be cut throat but than hey…what news reporter isn’t? What I like about Henry is that he is personable. Everyone around Henry would consider him a friend. From page one the action never lets up till the very last page. The ending was a bit of a cliff hanger…leading up to the next book, titled The Darkness.
Jason Pinter