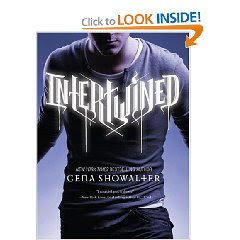 Life is difficult enough, when you are sixteen. It is even harder if you are Aden Stone. Aden is host to four souls. One can time-travel, one can raise the dead, one can tell the future and one can possess another human. As much as it sounds cool to be able to do all these things, it can have its draw backs like…all of a sudden being transported back in time to a younger version of yourself or being able to predict when a loved one or friend will die. Though all these things are as bad as having all four voices speak to you at the same time.

Mary Ann Gary is the new girl in town. From the first moment she meets Aden, she senses something special about him. It isn’t only Aden who is special. Being around Mary Ann makes all the voices in Aden’s head stop talking. Mary Ann better watch it as another girl has stepped into the picture. She is a vampire princess and she wants Aden.

I thought this wasn’t a pretty good book. Though I would have liked to have seen Aden do more with all the different souls and their abilities they possess. Hopefully, this will take place in the next book. What I enjoyed is that the main character Aden is a boy. Author, Gena Showalter could have gone with the obvious and made the main character a girl but she didn’t. In fact what I felt she did was made Aden and Mary Ann Gray kind of the misfits in the story but on the same hand people who if they knew the truth would want to be them. Intertwined is a good teen choice, for those who are paranormal obsessed.

Liyana said…
Yeah, I agree with you on that. It seems like a romance novel from the start, and less of action and paranormal. But maybe I'm wrong, I'm only like 20 pages into the books.
October 27, 2009 at 8:03 PM