Anjali Kapadia is twenty-seven. She is a widow. Anjali’s parents own an upscale sari boutique called 'Silk and Sapphires”. Anjali learns that the boutique is on the brink of bankruptcy. Before Anjali can come up with a plan, her Uncle Jeevan and his business partner, Rishi Shah arrives to bail out her parents but for a hefty price.

At first Anjali can’t stand Rishi but the longer she is in his company, she starts to open up to him and he to her. Will Anjali find love again?

Though, I liked The Forbidden Daughter better, I still thought The Sari Shop Widow was a good book. I liked that Mrs. Bantwal decided to do something different with this latest book and incorporated other characters as well as make the location in the United States vs. India. Not that this really made a difference for me but I thought the new location was refreshing. Anjali was sweet. Nice that she was a young widow vs. an old one. Rishi was debonair and handsome. I didn’t really feel the chemistry between Anjali and Rishi. While I may have had some issues with this book, I still plan to check out this author’s next novel. 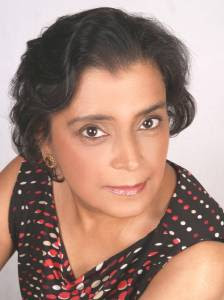 About the Author
Shobhan Bantwal calls her writing “Bollywood in a Book,” romantic, colorful, action-packed tales, rich with elements of her own Indian culture — stories that entertain and educate. She is an award-winning women’s fiction author of three published novels and contributed to an anthology of short stories.
Shobhan writes for a variety of publications including The Writer magazine, India Abroad, Little India, U.S. 1, Desi Journal, India Currents, Overseas Indian, and New Woman India. Her short stories have won honors/awards in contests sponsored by Writer’s Digest, New York Stories and New Woman magazines.
You can visit her website at ShobhanBantwal.com
Shobhan Bantwal

Kaye said…
This has to be one of the most eye catching covers though. I love it. I didn't realize this book wasn't set in India. That is definitely different.
October 9, 2009 at 6:10 AM

The Bookworm said…
Too bad the chemistry was off, it still sounds like a good read.
That cover is beautiful.
http://thebookworm07.blogspot.com/
October 10, 2009 at 8:23 AM

Thank you for reviewing THE SARI SHOP WIDOW for your popular blog. I appreciate the time and attention.

It's refreshing to see a blog dedicated to mostly to reviews.

Shobhan Bantwal
Author of THE SARI SHOP WIDOW
www.shobhanbantwal.com
October 12, 2009 at 9:03 AM

Kathleen Gilligan said…
I love the covers of Bantwal's books and this one doesn't disappoint. I'll add it to my wishlist, thanks!
October 13, 2009 at 8:07 PM