The Last Will of Moira Leahy

October 14, 2009
I want to thank Annsley with Crown and Shaye Areheart Books a division of Random House for sending me a copy of this book to review. 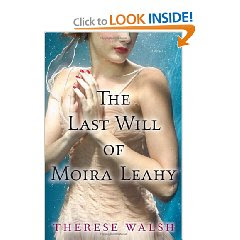 Twin sisters, Moira and Maeve were inseparable. They shared a bond that only twins could share. Though Maeve has the ability to sense when bad things were going to happen to the people she loved. It was almost like she was cursed. I mean…would you want the ability to know that something was going to happen and you may not be able to prevent it.

As Moira and Maeve grew up; Maeve became the popular one that everyone wanted to hang out with. Moira was known as the boring one. Moira developed a crush on a boy. Unfortunately, he wanted Maeve.

A terrible accident happened to Moira. That was nine years ago. Since than Maeve has not been back home. One day while at an auction. Maeve feels drawn to a dagger. She buys it. Instantly she experiences a connection to it. It is like it is talking to her. Whatever is happening to Maeve is causing her to re-live her past and that fateful day.

The Last Will of Moira Leahy is author, Theresa Walsh’s debut novel. I have to say that after reading this book, I would never have known it was her first. It reads like it is Mrs. Walsh’s sixth novel. I was spellbound and amazed in a good way. From other books that I have read, when one sister becomes jealous of another one, it is because the other one is very self-absorbed and steals the spotlight. This in my opinion was not the case between Maeve and her twin sister, Moira. I loved both Moira and Maeve. At first I thought Maeve was the stronger of the two sisters but after reading this book, I realized that Moira was braver. I liked that this story was both modern mixed with a little bit of paranormal elements. Just like the cover, this book made me think of a beautiful water orchestra. The Last Will of Moira Leahy is one of the best books I have read for 2009. Theresa Walsh is going on my must read authors list.