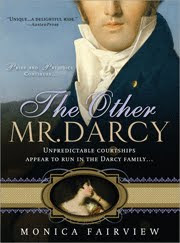 Did you know that Mr. Darcy had an American cousin?!

In this highly original Pride and Prejudice sequel by British author Monica Fairview, Caroline Bingley is our heroine. Caroline is sincerely broken-hearted when Mr. Darcy marries Lizzy Bennet— that is, until she meets his charming and sympathetic American cousin...

Mr. Robert Darcy is as charming as Mr. Fitzwilliam Darcy is proud, and he is stunned to find the beautiful Caroline weeping at his cousin's wedding. Such depth of love, he thinks, is rare and precious. For him, it's nearly love at first sight. But these British can be so haughty and off-putting. How can he let the young lady, who was understandably mortified to be discovered in such a vulnerable moment, know how much he feels for and sympathizes with her?

About the Author
As a literature professor, Monica Fairview enjoyed teaching students to love reading. But after years of postponing the urge, she finally realized what she really wanted was to write books herself. She lived in Illinois , Los Angeles , Seattle , Texas , Colorado , Oregon and Boston as a student and professor, and now lives in London . To find out more, please visit http://www.monicafairview.co.uk/


To celebrate the release of The Other Mr. Darcy, Monica Fairview and Sourcebooks Landmark are running a month-long contest in October on her blog!!
Beginning October 1, the contest will feature one Pride and Prejudice related question every day. The daily questions will focus on Jane Austen's beloved novel, but a few film adaptation questions will show up as well.
In order to enter the contest, you'll need to answer the Question of the Day in the comment section of the post on Monica’s blog (only serious answers will be considered valid). You'll be entered each time you answer. The more questions you answer, the more chances you'll have to win!
There will be five winners total, chosen at random: 1 grand prize winner and four runners-up. The Grand Prize will include The Other Mr. Darcy PLUS a box of CHOCOLATES to savor while you read! Four runners-up will receive copies of The Other Mr. Darcy! US and Canada mailing addresses only.
Put your P&P thinking caps on and good luck! And don’t forget to check out Monica Fairview’s new Austen sequel, The Other Mr. Darcy—in stores October 1, 2009!
contests