Watch out for Vengeance Road 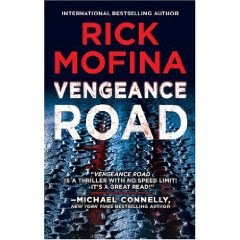 Jolene Peller used to be into drugs and prostitution. She is done with all that and is changing her life around. A big reason for the change has to do with her son. He is the most important thing to her. Jolene wants her friend Bernice Hogan to quit her old life as well. Bernice doesn’t want to change. Jolene has a bad feeling that something has happened to Bernice. Jolene is walking down towards the forest creek, when she hears a woman scream and it sounds like Bernice. Before Jolene can take another step, she gets knocked out. She awakes, only to learn that her worst nightmare has just begun.

Jack Gannon works as a reporter for the Buffalo Sentinel. His latest head lining, news worthy story is the body of Bernice. Jack stumbles upon a shocking discovery. One that will have him racing for his life.

Karl Styebeck is a cop with the Buffalo Police Department. Everyone considers him a hero. He once ran into a burning building and saved four children. Karl has a deep, dark secret. A secret that Karl is willing to do anything to keep hidden.

Another great read by Rick Mofina. The last book I read was Six Seconds and just like that one, I couldn’t put this latest novel down. I was starting to get depressed because I was in a reading slump but Vengeance Road did the trick and pulled me right out of it. I like how each character contributes in a different way to the plot as well as how they intertwine with each other. Each character has their own distinct personalities that make them very intriguing. My only issue was that the plot wanting me to believe one particular person was the suspect but I knew they weren’t. I can’t wait to read the next book.
Rick Mofina

Becky LeJeune said…
This was one of my favorites this year. I'd not read Mofina before this and was pleasantly surprised to find it utterly amazing.
October 9, 2009 at 8:29 AM