Having a Bewitching time with author Linda Wisdom + giveaway

October 21, 2009
I want to thank both Danielle with Sourcebooks for letting me review this book as well as allowing me to give away 2 copies of this book and to Linda Wisdom for being a guest on my blog.

Many thanks to Cheryl for having me here to talk about my favorite fictional witches. 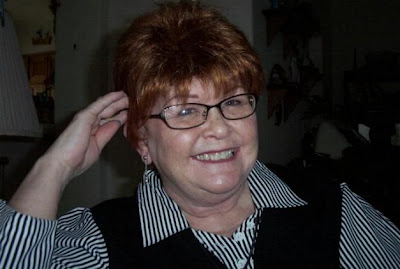 Although what gave me that nudge toward writing witches were film witches and memories of visiting Salem when my husband was stationed in Boston for two and a half years.

I’ve always enjoyed the movie I Married A Witch starring Veronica Lake as a 1700s witch, burned at the stake, although it’s a well known fact they weren’t burned in the US, but her spirit ends up bound. All it takes is her return in the 1940s, a love potion gone wrong and her long ago enemy’s descendant is caught up in the insanity. Yes, filled with historical inconsistencies, but it’s still a fun movie and you have to love a strong-minded witch.

Plus Practical Magic, while based on a book, it was the movie that revved my imagination.

Sally Owens was a witch in a family where the women were doomed to lose the men they loved. With that loss, she gave up her magic, until that gift was needed to save her sister.

For a fictional witch I’d say Camille in Yasmine Galenorn’s Sisters of the Moon series. Camille is strong, family-minded, and ready to do battle for her sisters. With each book she’s grown even more and you have to love to see what happens next.

One thing I’ve enjoyed in books and film are the stories that show women banding together. Friendships that are woven so tightly they’re stronger than family. Families bound in more than blood.

I value my own friends and in my way I wanted to write about that. I bound the young witches together with a forbidden spell and 700 years later they’re still bound together with friendship and a loyalty that can’t be broken. Mortal friends are there with a shovel and an alibi. Witches 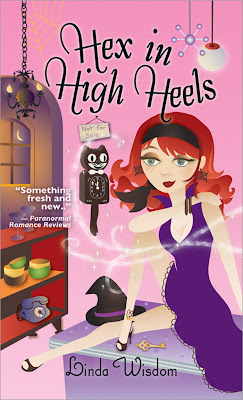 are there with spells blazing and cauldrons bubbling if need be.

Basically it wasn’t fictional witches that inspired me, but my friends around me as we all reached that point where we tapped into our inner witch. In Practical Magic Dianne Weist’s character said “there’s a little witch in all of us”.

There’s a lot out there that inspires me. Books, movies, and friends.

So there you have it. We all have some witch in us, magic that hovers overhead, and there’s nights that we really do think about dancing under the moon. If witches in books and movies do it, why can’t we?

Must be a follower. Open to US and Canada only.

I will pick the 2 winners October 31st.

Kaye said…
So far I really like Shirley Damsgaard's Ophelia and Abby series. How can you not like a librarian witch and her grandmother witch. I haven't read any of Linda's books but I love the cover and would like a chance to win it and read it. Who knows, maybe I'll find a new favorite.

Kiki Howell - Author said…
This is a tough question for me to narrow down an answer for, so forgive me!
Sally Owens is definitely my favorite movie witch too. I like that despite her animosity toward magic at the beginning, the ease with which she can still light candles and work spells. To be a witch and have a sister witch - fantastic fun!
As far as books, I liked the Fyne Witch Series by Linda Winstead Jones. They each overcame so much, and each had strengths all their own.
But, I also have to mention a few non-fiction Wiccan's as I do a lot of research in those books. Some of the best with wonderful writing skills and a wealth of information to share are Phyllis Curott, Silver Ravenwolf, Marian Green and Demarco who wrote "A Witch In The Bedroom" which is actually a wonderful read for as woman to gain self-esteem and self-truth...
Sorry Again, knew I would go on so!
Kiki (howell[dot]kiki[at]gmail[dot]com)
October 21, 2009 at 7:48 AM

Linda Wisdom said…
Kaye, I enjoy Shirley's books too. And you should try Madelyn Alt's series along with Annette Blair.

Linda Wisdom said…
I've read Silver Ravenwolf, Kiki. I think half the fun is finding a lot of books.

Tabitha Shay said…
Hi Linda,
A great blog and I love your books and their sassy covers....Thanks for mentioning my witch series and a big thanks to fans out there...Tabs
October 21, 2009 at 9:10 PM

penney said…
Great blog today I never read any of her books this sounds good thanks
Penney
October 22, 2009 at 6:47 PM

renee said…
I like the tabitha witch, accually i enjoy all witches, they are quite the characters.
reneetaylor at sympatico dot ca
October 30, 2009 at 5:14 PM

cherdon said…
I am a follower of your blog

My favorite witch of all time was Samantha from Bewitched because she was a good witch who tried her best to live a mortal life but couldn't help twitching that nose of hers LOL. It was a good family show. I found it very entertaining.

Please enter me. Thanks very much.

Belinda M said…
My favorites are from the Witches of Eastwick. But specifically Cher as Alexandra Medford . Other than it being entertaining she did a great job with the character